Quarry Bank Mill in Cheshire, England, is one of the best preserved textile mills of the Industrial Revolution and is now a museum of the cotton industry. It has been designated by English Heritage as a Grade II* listed building.[1]

The mill was founded by Samuel Greg in 1784 [2] in the village of Styal on the River Bollin. Its original iron water wheel was designed by Thomas Hewes and built between 1816 and 1820. The over head shafts above the machines were attached to the water wheel by a belt. When the water wheel turned, the motion moved the belt and powered the machine.

The Hewes wheel finally broke in 1904. After that the River Bollin continued to power the mill through two water turbines. When steam engines were introduced, the mill owners in 1810 bought a Boulton and Watt steam engine and then a few years later purchased another. This was because a steady flow of water was not always avaible in summer and brought production of cloth to a standstill during some years. Steam engines were consistent and produced power all year round. Today the Mill is home to the most powerful working waterwheel in Europe, an iron water wheel which was originally at Glasshouses Mill at Pateley Bridge. This wheel was designed by Sir William Fairbairn, the Scottish engineer who had been an apprentice of Thomas Hewes. The old boiler room and several small steam engines are on display.

The estate surrounding the mill, also developed by Greg, is the most complete and least altered factory colony of the Industrial Revolution. The estate and mill were donated to the National Trust in 1939 by Alexander Carlton Greg and are open to the public. The mill continued in commercial production until 1959.

The factory was founded for the spinning of cotton and by Samuel Greg's retirement in 1832 was the largest such business in the United Kingdom. The water-powered Georgian mill still produces cotton calico. After Samuel Greg died in 1834 his son, Robert Hyde Greg took over the business and soon took the decision to introduce weaving at the mill.

Originally Samuel Greg converted farm buildings in the nearby village of Styal to house the workers for the mill. As the mill increased in size, purpose-built housing in Styal was constructed for the workers.[3] The village is still a thriving community.

Quarry Bank Mill is notable for its use of unpaid child apprentices, a system that continued until 1847, with the last child to be indentured starting work in 1841. Greg employed Peter Holland, father of the Royal Physician Sir Henry Holland, 1st Baronet and uncle of Elizabeth Gaskell, as mill doctor. Holland was responsible for the health of the children and other workers, and was the first doctor to be employed in such a capacity. The children lived in a separate building near the factory called the Apprentice House. Most children came from workhouses. They would work long days with schoolwork and gardening after coming back from the mill. The work could sometimes be dangerous, with fingers being occasionally lost. However, most children were willing to work in the mill because life at a workhouse would be worse. Today the Apprentice House is open to the public with timed tours being conducted by costumed interpreters.

The Greg family were Unitarians and built Norcliffe Chapel in Styal village. Their non-conformist religious beliefs provided the Gregs with important business contacts as many of the major Manchester Industrialists were Unitarian. Methodist workers at the mill later sought a place of worship, and the Gregs converted a grain store in Styal village into a Chapel for their use.

The Greg Family also had mills and the Escowbeck Estate, in Caton, near Lancaster, where they also had their own observatory built.[4]

As well as owning mills in England, the Gregs also owned sugar plantations on the West Indian island of Dominica; their ownership included, until the abolition of slavery in British colonies in 1838, several hundred enslaved Africans.[5]

Several steam engines and other steam related items are on display in the old engine and boiler rooms. These are rather hidden away down stairs at the left hand end of the mill. 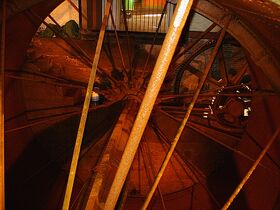 A view inside the largest water wheel in the UK, situated at the Quarry Bank cotton mill. It is still working today, powering the looms. 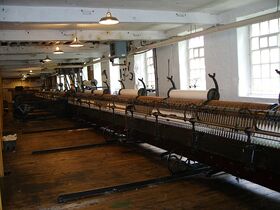 Retrieved from "https://tractors.fandom.com/wiki/Quarry_Bank_Mill?oldid=118615"
Community content is available under CC-BY-SA unless otherwise noted.