Production of the truck taken over by their distributor

In 1949 Proctor's distributor Praill's of Hereford took over production[1] This resulted in almost every firm nationalised into BRS at Hereford having at least one Proctor. Others were transferred from other branches and it became a "Proctor hot spot" with Hoovers in Merthyr having the largest fleet. Production ceased in 1952.

Proctors lorries were developed by an operator seeking to improve  on economy and performance. The company itself Proctor Springwood Limited based at Mousehold in Norwich were actually hauliers founded in the 1930s who needed a decent machine to keep their business active so after WW2 built a prototype 6 Ton lorry powered by a Perking P6D Diesel engine. This unique but original vehicle used a 5 Speed gearbox and rear axle both sourced from the well known motorvehicle components make, Moss. Another couple of models were made one of them was a short wheelebased dumptruck and the next one was a new haul tractor that were later added to their small range of models available at the time. The firm also had its own distributor agent called Praills Motors who took over Proctor vehicle production in 1949 however all original Proctor truck manufacturing ended in 1952, after about 40-50 Proctor motor vehicles including several buses and coaches all of these were built. 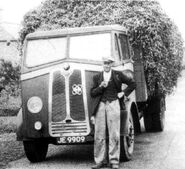 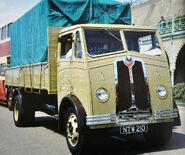 An Original Proctor Lorry Model Range brochure of the 1940s 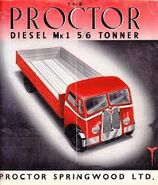 Retrieved from "https://tractors.fandom.com/wiki/Proctor_Springwood?oldid=223777"
Community content is available under CC-BY-SA unless otherwise noted.