Priestman initially founded in Hull in 1876.

The Company was founded by William Dent Priestman (1847-1936) who was a strict Quaker and who worked with his father, at Holdernes Foundry in Hull, and later with his brother together they founded the new Priestman Brothers Limited.

The brothers started work in 1870 in a small works, The Holderness Foundry bought by their father Samuel Priestman, who was also a director of the North East Railway Company. From initial jobbing engineering, the first very unusual product was for a complete paddle steamer for Peru in South America. A British engineer working for the Government of Peru wrote to William Dent Priestman asking for a price to build it. The low quote was accepted !!! However it was too big for their yard in Williamson Street at Hull, and they hired land opposite to lay the keel. They built EVERYTHING the hull, steam engine, controls, paddle wheels, accommodation and crew quarters. This unusual product was followed by a request to build a grab crane to search for gold bullion in Vigo Harbour, Western Spain. Thomas Christie (son of the famous hat manufacturers in London) formed a consortium to search for bullion sunk in a sea battle off Vigo Harbour two centuries previously. Nothing was found after 9 months of digging around. Not surprising as the grab design was totally unsuitable for this job. It did however, lead "Wm. Dent" ( the name by which he was known) to build a new, excellent Grab Dredging Crane patented in 1878 and sold to the Hull Dock Company, a photograph of which survives.

It was also immediately mounted on a rail waggon or 'bogie' needed for a press launch in their yard in Hull, and then taken to the World Exhibition in Sydney, Australia in 1879 - a story covered in detail in his diary (existing in the collection) about this voyage.

By the 1880s William Priestman had developed an interest in the developing technology of the internal combustion engine. William Priestman developed an engine that had a pressurised the fuel tank using an air pump. The outlet from the tank leading to a fuel atomizer which continuously injected warm fuel into a vaporizing chamber heated by exhaust gases, with lamp oil being used as the fuel. He spent 18 months trying to determine the design of the sprayer nozzles - he built at least five versions in existence - as the angle at which the fuel and air streams met, was to prove crucial to efficient operation. He patented his first, fully operational, continuously running engine in 1885 and filed many subsequent patents of improvements. It is fully recognised in authoritative engineering history that the Priestman Heavy Oil engine preceded both the Ackroyd-Stuart's engine, and Dr. Rudolph Diesel's engine in Germany, by many years.

(Richard Hornsby & Sons another local company in Lincolnshire was also building similar engines to the patents of Herbert Akroyd-Stuart) [1].

These range of grabs soon ran into hundreds of types and sizes, from sugar cane handling in Jamaica to iron ore discharging in Soth Wales, with such success that they were soon in demand all over the world. The costs of design work and building the thousand or so oil engines in the 1880s absorbed so much of the firm's money that they went into what was termed 'Liquidation' in 1895. This was not the term as used today and became a 'Board of Management' to run the company, with the brothers William Dent Priestman and brother Samuel Priestman as managers, as they were in fact the only people who knew how the company worked!

Restructuring followed, as they were back in profit by 1898 and Priestman began to shine brightly once more. By the First World War, its cranes were being used to rebuild French villages, and dredge canals . The introduction of the "1921 Field Ditcher" was another milestone in the firm's history and led to the huge range of products that were introduced in the 1930's onwards.

In 1928, Priestman produced the first of their "animal-named" excavators. Such names as the Lion, Tiger and Panther would later become synonymous with Priestman. Early machines were very crude with the driver sitting next to the noisy mechanicals but still sold in healthy numbers.

The machines can be configured as Draglines, Face Shovel, Backhoed, Skimmer and Cranes, by changing the Jib / Boom and ancillary equipment.

Work started on their new Marfleet works 1950, would eventually cover 63 acres in Hull, and by 1963, when the firm embraced hydraulic power, it had long been a household name.

In the 1970s they developed a range of hydraulic excavators. The VC range of dredging machine with long reach booms to replace draglines. his had an innovative sliding counter weight to balance the boom at long reach. These were popular with small sand and gravel pits and with the drainage board and water companies in Lincolnshire for cleaning dykes. They also built special versions on tall pedestals for dock side un-loading duties.

In 1972 the Steels Group - Priestman then parent company was taken over by the expanding Acrow Group. Steels Group also owned the Coles Cranes company and the Neal & Taylor crane companies.[2]

The Priestman division was sold off in 1984 to the nearby firm of Sanderson of Skegness in Lincolnshire. The Excavators complimenting their lineup of sitedumpers, mixers & site batch plants and forklift trucks.

The remaining Acrow Group collapsed in 1985 when the company went into administration and the Crane division, by now slimmed down to one production plant in Sunderland, was picked up by the American crane builder Grove.

Even as recently as the late 1980's Priestman produced special "to order" excavators and plant machinery for the Home Office to meet MOD specification, with the Lion range of excavators and cranes produced even then 20 years after mainstream sales had been discontinued.[citation (source) needed]

The Sanderson Group then got into trouble in the early 1990s, due to the recession and cheap foreign imports from Japan and the far east of Hydraulic excavators. The Priestman operation were then sold to another local company RB Cranes, from Lincoln. RB sold the VC line of long reach machines for a short period, as they complimented their dragline product lines for dredging operations. RB Cranes following the break-up/restructuring of the Ruston-Bucyrus group were then taken over by NEI Group and merged with the crane building firm Coles of Sunderland operation and, began building offshore cranes for then booming North Sea oil rig platform market.

Following the Sanderson Forklift era the part of the company was bought in a management buyout by Tim Dillon, the former manager and continued to provide Spares back up and support for machines built from 1900 onwards until the companies demise in the 1990's. The resurrected company produced access platforms mounted mostly on LDV van chassis for local Kingston Communications telephone vans amongst others through the 1990's.

The replacement parts business became unsustainable after the last Priestman employee retired in 2007. All the drawings and specifications exist. These are all in storage slowly deteriorating with age.

Today, what is left of the firm trades in Bradford under new owner, Gardner Denver, the American based compressor and blower manufacturer. No longer are cranes or excavators manufactured.

The Priestman Grabs & VC Excavators operations along with RB Cranes were sold in October 2009 to Delden CSE Ltd, who continue to offer a full range of spares and new grab manufacture from their premises in Selston, Nottinghamshire.

Today the former Priestman factory site on Hedon Road, Hull, exists as a diverse industrial estate with numerous business using the former excavator manufacturers old premises and site. ADD - from W.D. Bromwich of Hull,2013,I worked for Priestman for 30 years and hold both the company archive and considerable personal memories of the activities of the firm, family and emloyees, I have tried to clarify the early part of the above text, as it missed many crucial elements. For anyone interested in further accurate background and brochures, photographs DVDs etc please use e-mail contact: suebrom@yahoo.co.uk - if I can help I will.

A range of Cranes for fixed industrial dockside and Oil Rig pedestal mounting were built from the 1970s onward.

A testament to the longevity and quality of Priestman Brothers machines is the dredger which was in use for over 100 years on the River Ouse at York till the late 1980's. Priestman were still producing spare parts for this machine to keep it running, when in reality the sales staff should have been selling a new machine - had they done so Priestman's may still have existed today, but the truth is the product they made was just too good and lasted too long.[citation needed] Their competitors undercut them and sold similar machines, some of them allegedly blatant copies, at a lower prices.

A large number of machine still survive today. Some are still used in commercial work, mainly in 'occasional use' roles such as dredging ponds and canals. Several dockyards and harbours still use many Priestman cranes found at work.

A increasing number are being restored by enthusiasts and used for demonstrations and 'play'.

A number of toy manufactures have included Models of Priestman machines in there ranges going back to the early twentieth century. 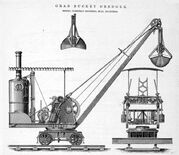 A 1900 Priestman Brothers Steam Excavator on a riverbarge

A 1950s Priestman Dragline on a classic machinery show 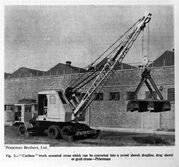 A 1950s Priestman Caribou Crane Diesel on a Foden carrier 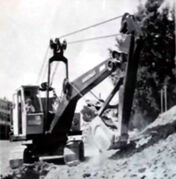 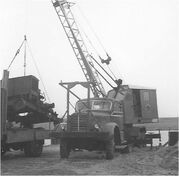 A 1960s Priestman Caribou Crane on a Leyland truck 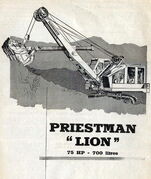 A 1960s Priestman Lion Dragline with a Foden Dumptruck

A 1960s Priestman Panther Dragline Diesel in a quarry 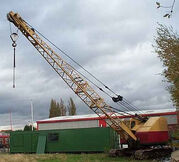 A 1970s Priestman Caribou Clamshell Excavator on a Leyland lorry

A 1970s Priestman Wolf Crane on a Mack GB Cranetruck

A 1980s Priestman Caribou Crane Diesel on a Foden Cranecarrier

A pair of 1980s Priestman Lion Crawlercrane and Dragline models 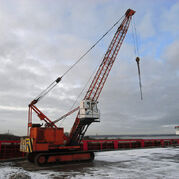 A 1980s Priestman Lion Dragline Diesel working in a mine 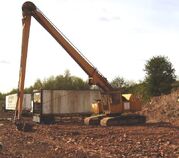 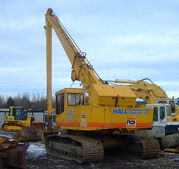 A 2010s Priestman BR VC- Series Model Range
Add a photo to this gallery
Retrieved from "https://tractors.fandom.com/wiki/Priestman?oldid=215445"
Community content is available under CC-BY-SA unless otherwise noted.