The Plymouth Cranbrook is an automobile which was built by Plymouth from 1951 to 1953. It replaced the Special Deluxe when Plymouth changed its naming scheme and was essentially the same as the Plymouth Concord and Cambridge, but at a higher trim level.

The name Cranbrook may have been taken from a city in British Columbia, but it may also have been taken from Cranbrook Drive in Detroit; this small street intersected with Cambridge Avenue. Both streets are between 7 Mile Road West and 8 Mile Road West, near the Dodge Main plant. Concord Street ran by the plant. This indicates that the cars may have been named after streets near Chrysler Corporation facilities.

The Plymouth Cranbrook, as a car, was conservatively styled, designed to fit K.T. Keller's notion that cars be practical and allow drivers to sit upright while wearing a hat; it was sold at a time when competitors favored the low and sleek look. Differences between the 1950 Special Deluxe and the 1951 Plymouth Cranbrook are relatively few in number and scope, with interchangeable glass and doors, but different rubber seals; lack of woodgrain on the instrument panel; plastic brake handle instead of chrome; and other similar changes. More substantial was having what had been the hood release handle function as the overdrive control. Fender lettering and other badging necessarily changed as well. From a distance, the cars were essentially similar.

The Plymouth Cambridge and Plymouth Cranbrook models shared the P-23 Series Number in both 1951 and 1952.[3] The six-cylinder flathead engine produced 97 hp (72 kW).

For 1953, the boxy shape was changed for straighter lines, with sleeker and more modern styling. The windshield went to a modern one-piece unit; and the door handles pulled out instead of twisting. The glove box was moved to the center for easier access by the driver. The gas cap was moved to under the trunk lid, resulting in initial problems with gas spilling out of a full tank into the trunk; this problem was resolved with baffles in mid-1953.

The three-window coupe and fastback sedan were dropped for 1953; the former long and short wheelbase models were consolidated with a common wheelbase of 114 inches (2,900 mm), only one inch shorter than those of Chevrolet and Ford (though considerably less overhang than those competitors gave the Cranbrook a "shorter" look.) Power increased margnially, to 100 hp (75 kW).

In 1954, the Cranbrook name was replaced by the Belvedere, which had been the top trim level of the Cranbrook; all Plymouth names were switched to those of upscale hotels.

The Plymouth P-24 series, which was marketed in the U.S. as the 1953 Plymouth,[4] was also assembled in Australia in that year by Chrysler Australia.[7] As in the U.S.,[4] it was sold as the Plymouth Cambridge and Cranbrook.[1]

In 1954 assembly of the P-25 series commenced, with Plymouth Cambridge, Cranbrook, Savoy and Belvedere names used.[8] Australian design input was minimal, although major body panels were locally produced. From 1956 a coupe utility variant was offered in addition to the four door sedan and was available in Cranbrook, Savoy and Belvedere models.[9] Australian production of the P-25 continued through to 1957.[8] 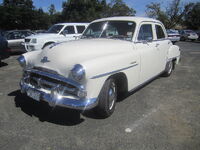 This 0-87349-461-X lacks ISBNs for the books listed in it. Please make it easier to conduct research by listing ISBNs. If the {{Cite book}} or {{citation}} templates are in use, you may add ISBNs automatically, or discuss this issue on the talk page.

Retrieved from "https://tractors.fandom.com/wiki/Plymouth_Cranbrook?oldid=214974"
Community content is available under CC-BY-SA unless otherwise noted.