The Plymouth Belvedere is an American automobile model which was produced by Plymouth from 1954 to 1970.

Introduced on March 31, the 1951 Plymouth Cranbrook Belvedere arrived as a two-door pillarless hardtop. It was Plymouth's first vehicle of such design and was built in response to Chevrolet's Bel Air. That vehicle, the first two-door hardtop in the low-priced American market, was introduced in 1950 and ended that model year with great success.

The Cranbook Belvedere was not a separate model. Rather, it was the specific name only used for the two-door hardtop version of the Cranbrook. Being built on that car's 118.5 in (3,010 mm) wheelbase gave the two-door Belvedere very favorable proportions. Powering the Belvedere was the familiar flathead straight-6 engine. Displacement was 217.8 in3 (3.6 L), the compression ratio was a relatively low 7.00:1, and output was 97 hp (72 kW) (SAE gross). First-year prices started at US$2,114.

For 1952, Plymouth kept the Cranbrook Belvedere largely unchanged. The biggest alteration was to the color scheme; to further distinguish the top-level Belvedere from other Plymouths, the two toning now flowed from the roof over the beltline onto the trunk, which has been referred to as the "saddleback" treatment. Two Tone color schemes were Sable Bronze over Suede, Black over Mint Green, and Gray over Blue. Overdrive was made available as optional equipment in the 1952 Plymouth. In overdrive, the engine made three revolutions for each rear wheel revolution against four without overdrive. The engine was a complete carry over from 1951. Prices, however, did increase by about US$100 to $2,216. Production for 1951 and 1952 totalled 51,266 units, which was slightly better than a quarter of Chevrolet Bel Air and Ford Victoria production for that same period. There has never been a separate breakout for Plymouth production figures for the Korean War era years of 1951–52.

The Belvedere remained a part of the Cranbrook series through 1953. For that year, all Plymouth models were completely restyled. Major style changes included a shorter 114 in (2,900 mm) wheelbase, a one-piece windshield, flush rear fenders, and a lower hood line. In April 1953, Plymouths received the Hy-Drive semi-automatic transmission. Again, Plymouth was behind the competition with Chevrolet having introduced the fully automatic Powerglide transmission in 1950, with Ford following the next year with its fully automatic Ford-O-Matic transmission. The engine was carried over from 1952 with the only enhancement being a slight increase in the compression ratio to 7.10:1, which yielded a rating of 100 hp (75 kW). The shorter wheelbase partly led to an overall stubby appearance that was panned by consumers and critics. Even with a reduced starting price of US$2,132, demand was rather low. A total of 35,185 1953 Belevederes were sold.

The Belvedere replaced the Cranbrook as the top-line offering for 1954. Now, a separate model instead of just a two-door hardtop coupe, a buyer could choose a convertible, two-door station wagon, four-door sedan or the aforementioned two-door hardtop, now called the Sport Coupe. Slight styling updates adorned the carry-over body design. For the first time, small chrome tailfins appeared on the rear fenders. In March 1954, Plymouth finally offered a fully automatic transmission, the Chrysler Corporation's well-regarded PowerFlite 2-speed. Also new was a larger standard engine: a 230.2 in3 six-cylinder borrowed from the Dodge Division. Power was now rated at 110 hp (82 kW). Belvedere production slipped to 32,492 for the year.

All Plymouths were treated to a major overhaul for the 1955 model year. This was the first year of Chrysler Stylist Virgil Exner's "Forward Look." The Belvedere returned as top-of-the-line.

For 1956, Plymouth styling evolved from that of the 1955s. Most notable would be the introduction of the first push-button automatic transmission to appear in an American automobile, and a more dramatic rear-end treatment highlighted by a pair of rakish tail-fins. In early 1956, the Fury joined the Belvedere line as a special-edition high-performance model. In 1956, Plymouth added seat belts.[4]

After the Fury was expanded to become Plymouth's top model in 1956, the Belvedere was demoted as the middle priced model after the Plaza and Savoy.[citation needed]

In 1956, Chrysler in a public relations campaign took a Belvedere and had turbine engine fitted instead of the standard gasoline engine, and was driven across the US.[5]

1957 would be a banner year for the Chrysler Corporation, and Plymouth was no exception. Plymouth's design was so revolutionary that Chrysler used the slogan "Suddenly, it's 1960!" to promote the new car. The Belvedere line once again included the Fury. This year a new 318 in3 V8 with dual four-barrel carburetors was the standard engine in the Fury, and it was available on all Plymouths.

The Belvedere would once again return as a top level trim for 1958. Styling was evolutionary from the sleek 1957 models. Quad headlights were new, as was a big block 350 in3 V8 with dual four-barrel carburetors dubbed "Golden Commando" optional on all models.

The convertible was only available in the Belvedere model between 1956 and 1958. 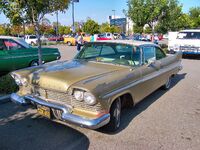 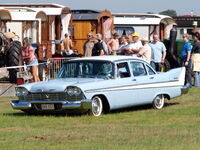 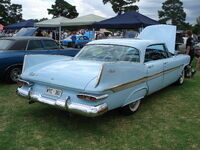 Starting in 1960, Belvederes got a brand-new standard inline six-cylinder engine. Colloquially known as the slant-6, it displaced 225 cu in (3.69 l), featured overhead valves, and a block that was inclined 30 degrees to the right to permit a lower hood line with maximum displacement. This engine used a single-barrel Holley carburetor, and became known for its extremely rugged construction, exceptional reliability and longevity. In 1961, "most beholders would agree...it was hit with the ugly stick."[8]

Starting with the 1962 model year, all full-size Plymouths were "downsized", with more compact outside dimensions. American car buyers at the time were in the thought mode of "Bigger is Better", and sales of these models suffered. However, the big block V8-engined (426) Belvederes proved to be a terror on the track, and became a desirable drag race car due to its lightweight body.

The 1963 and 1964 models used the same unibody platform as the '62s, but were restyled to look longer and wider.

The 1964 Belvedere (and corresponding Fury hardtop coupes) featured a new "slant-back" roofline that proved to be popular, and sales improved significantly over '62 and '63.

The 1964 Belvedere is also notable for being the car used to introduce the 426 Chrysler Hemi engine, which used a canted large-valve arrangement. This was such a significant high-RPM breathing improvement that Hemi-equipped Plymouth Belvederes won 1st, 2nd, and 3rd at NASCAR's 1964 Daytona race. One of the winning drivers was the famous Richard Petty.[10]

In 1965 Plymouth once again made the Fury a full-size car, and Belvedere became the intermediate size offering.[12] The 1968 television show Adam-12 featured a 1967 model black and white Belvedere as the standard Los Angeles police cruiser.

The Plymouth GTX was introduced as the top of the line Belvedere, and Richard Petty won the Grand National championship in NASCAR in a Belvedere. The new LA-style lightweight 318 engine was introduced for this year and would remain available on the Belvedere through its life.

In 1968, the line was restyled with a roofline changed to follow the Charger, standard flip-out rear quarter windows (that would also be used in 1969), and "Coke bottle styling".

The Belvedere name was dropped at the end of the 1970 model year, replaced by the Plymouth Satellite name originally reserved for higher-end Belvederes. The Satellite itself lasted only through 1974; starting in 1975, the car was renamed Plymouth Fury, and the longer-wheelbase Plymouth Fury became the Gran Fury.

(Note: there are some discrepancies in this section referring to the term "Hemi". 340 engines were not Hemis and the Hemi was first put into production and performance use as early as 1951, not in the late 60's as the last paragraph suggests. For more info on the Hemi see Chrysler Hemi engine.)

The 340 was introduced in 1968 and began to build what was one of the most popular and best small block V8 engines. The 340 had high-flow cylinder heads and a 180°, 2-level intake manifold. The 340 reached its highest stock performance peak in 1970 with a three two-barrel carburetor package and featured a thick web block, specially machined cylinder heads, adjustable rocker arms, and special intake manifold and carbs. In 1972, the 340 was bumped down in compression from 10.4:1 to an emissions friendly 8.5:1 and shortly thereafter we had the 1973 oil crisis.

The Plymouth Belvedere was also produced by Chrysler Australia. The first model, based on the 1953 US Plymouth, featured a high level of Australian content, with body panels pressed in Chrysler Australia's Keswick facility in South Australia and matched with a 217.8 cubic inch (4107cc) side-valve six-cylinder engine, imported from Chrysler UK.[14] It was produced as a four-door sedan [14] and as a locally developed 2-door coupe utility,[15] along with similar Cranbrook and Savoy models, until replaced by the Chrysler Royal in 1957.[14] The Belvedere was reintroduced to the Australian market in early 1958 when Chrysler Australia began assembling the current model Belvedere 4-door Hardtop which was imported from the US in knocked-down form.[16] The 1959 model was equipped with 318 cubic inch V8 engine and push-button automatic transmission.[17] Chrysler Australia replaced their Plymouth Belvedere, Dodge Custom Royal and De Soto Firesweep models with the Dodge Phoenix in 1960.[18]

During Oklahoma's 50th anniversary, a new 1957 Plymouth Belvedere was sealed in a concrete enclosure as a time capsule near downtown Tulsa. It was unearthed June 14, 2007[19] during the state's centennial celebrations, and was publicly unveiled on June 15. In line with the Cold War realities of late 1950s America, the concrete enclosure was advertised as having been built to withstand a nuclear attack.[20] The concrete enclosure, however, was not airtight and allowed water to leak in, which caused significant damage to the vehicle.[21]

The controversial[22] televised vehicle customizer Boyd Coddington would have been the first to start the unburied car, had it been operable.

A second such car, this one a brand-new Plymouth Prowler, was encased in an above-ground vault in 1998 to celebrate the city's centennial. It will be revealed after the same period of time as the Belvedere in the year 2048. 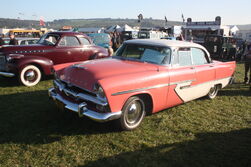