The Plaxton President was a double-decker bus body built at Northern Counties plant in Wigan, England and branded as a Plaxton product for its main production run. It was unveiled in 1997 and built between 1999 and 2005. When Plaxton became part of TransBus International, the body was sold under the TransBus name; then becoming the Alexander Dennis President. The President was built on the Dennis/TransBus Trident, the DAF DB250 and the Volvo B7TL chassis.

The body was designed to compete with the Alexander ALX400 body, and had neat rectangular front headlights below a large front windscreen. From the side, it can be easily recognised by the different depths of windows on the lower deck; however, this is less apparent with newer bonded-glazed models. Seating varied according to the chassis and specification. TfL models were typically built with 41 seats upstairs, and 23 downstairs, with a centre exit door. Early TfL versions also had the staircase moved to the centre of the bus, although this was later changed to the standard position of just behind the driver.

There is an enormous fleet of buses serving London, UK, with the result that if one bus was popular, they were built in big numbers.

London Central/General had 469 President-bodied buses, numbered PVL1-419/PDL1-50. However new deliveries have seen some Go-Ahead London Central/General Presidents being withdrawn and sold to a variety operators outside the capital - and outside the Go-Ahead Group more generally. Metroline have their TP, TPL, VP and VPL classes, all President-bodied, which number in excess of 550. Arriva London North and London Sovereign have a batch on DAF chassis, unusual given the numbers of Volvos and Tridents with President bodies.

Outside London the Presidents are less common, however some operators have built up substantial numbers of them.

Lothian Buses are the largest operator of Presidents outside London with approximately 200 purchased from June 1999 to June 2004. Apart from seven examples on Volvo B7TL chassis Lothian's examples are all Dennis Tridents including some high capacity 11m examples. National Express West Midlands, formerly Travel West Midlands, are the second largest operator of Presidents outside London with 102 examples new from Autumn 1999 to Summer 2000 all of which have Volvo B7TL chassis and were internally refurbished in 2007-08.

Go-Ahead Group companies outside London also have Presidents in substantial numbers. Brighton & Hove have the largest allocation with 36 on Dennis Trident chassis purchased in March/April 2001. This was followed by Go North East who took 15 in November 2001 again on Dennis Trident chassis although 8 of these transferred to Go-Ahead's Oxford Bus Company subsidiary in 2006. Finally Southern Vectis purchased 7 Presidents on Volvo B7TL chassis in September/October 2002, albeit before they were takenover by Go-Ahead.

Stagecoach took over 40 low-height Presidents on Dennis Trident chassis in the early/mid 2000s. These were originally allocated to the Cambus, Manchester and Oxfordshire subsidiaries - although they've since been transferred to other subisidiaries within Stagecoach. They were originally intended to have had Alexander ALX400 bodies - Stagecoach's standard double deck body, but were switched to Presidents due to quicker build times.

East Yorkshire Motor Services are another fairly major President fleet with 36 examples on Volvo B7TL chassis. 30 of these were for the main East Yorkshire fleet with the other 6 for their Finglands subsidiary in Manchester.

Smaller orders include Arriva which purchased 20 on Volvo B7TL chassis for its Arriva Yorkshire subsidiary, the Blazefield Group who took 19, 16 for Burnley & Pendle and 3 for Yorkshire Coastliner, and independent based operators like Pete's Travel, The Mayne Group, Blue Bus of Bolton, Hedingham Omnibuses, North Birmingham Busways and Liverpool Motor Services, although with the exception of Hedingham these companies have since been taken over by larger groups within the British bus industry.

The Mayflower Group, the parent company of TransBus International, went into administration in March 2004. It was bought out in May 2004 by a consortium including Brian Souter, the owner of the Stagecoach Group and was renamed Alexander Dennis. A programme of restructuring began within Alexander Dennis which, at the time, saw the Plaxton coach division divested and the TransBus product range rationalised. In turn a decision was taken to close the former Northern Counties plant in Wigan and phase out the President in favour of the Falkirk-built ALX400. The final Presidents were built at the Wigan plant in January 2005 and both it and the ALX400 would be phased out in favour of the semi-integral Alexander Dennis Enviro400 which took over from end of 2005. The Enviro400 has elements of the ALX400 and President in its design. 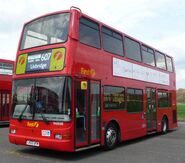 Nearside of a First London President.
Add a photo to this gallery

Retrieved from "https://tractors.fandom.com/wiki/Plaxton_President?oldid=184697"
Community content is available under CC-BY-SA unless otherwise noted.