Tractor & Construction Plant Wiki
Register
Don't have an account?
Sign In
Advertisement
in: Articles with invalid date parameter in template, All articles lacking sources, All pages needing cleanup,
and 3 more

A piston is a component of reciprocating engines, reciprocating pumps, gas compressors and pneumatic cylinders, among other similar mechanisms. It is the moving component that is contained by a cylinder and is made gas-tight by piston rings. In an engine, its purpose is to transfer force from expanding gas in the cylinder to the crankshaft via a piston rod and/or connecting rod. In a pump, the function is reversed and force is transferred from the crankshaft to the piston for the purpose of compressing or ejecting the fluid in the cylinder. In some engines, the piston also acts as a valve by covering and uncovering ports in the cylinder wall.

A piston and its connecting rod. 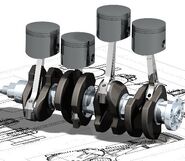 CAD drawing of crankshaft and pistons.

Steam engines are usually double-acting (i.e. steam pressure acts alternately on each side of the piston) and the admission and release of steam is controlled by slide valves, piston valves or poppet valves. Consequently, steam engine pistons are nearly always comparatively thin discs: their diameter is several times their thickness. (One exception is the trunk engine piston, shaped more like those in a modern internal-combustion engine.)

Piston pumps can be used to move liquids or compress gases.

Close-tolerance pistons have a number of disadvantages: They can swell and stick, their properties alter due to atmospheric changes, and they fit tightly in the cylinder with close tolerances. Backlash may suck some of the bin material into the valve which can cause the piston to stick.

Common features of double piston construction: They cannot swell and stick, they fit loosely in the cylinder (no tight tolerances), atmospheric changes do not affect them, and foreign material entering the cylinder doesn't cause sticking.

Since the piston is the main reciprocating part of an engine, its movement creates an imbalance. This imbalance generally manifests itself as a vibration, which causes the engine to be perceivably harsh. The friction between the walls of the cylinder and the piston rings eventually results in wear, reducing the effective life of the mechanism.

The sound generated by a reciprocating engine can be intolerable and as a result, many reciprocating engines rely on heavy noise suppression equipment to diminish droning and loudness. To transmit the energy of the piston to the crank, the piston is connected to a connecting rod which is in turn connected to the crank. Because the linear movement of the piston must be converted to a rotational movement of the crank, mechanical loss is experienced as a consequence. Overall, this leads to a decrease in the overall efficiency of the combustion process. The motion of the crank shaft is not smooth, since energy supplied by the piston is not continuous and it is impulsive in nature. To address this, manufacturers fit heavy flywheels which supply constant inertia to the crank. Balance shafts are also fitted to some engines, and diminish the instability generated by the pistons movement. To supply the fuel and remove the exhaust fumes from the cylinder there is a need for valves and camshafts. During opening and closing of the valves, mechanical noise and vibrations may be encountered. A two-stroke engine does not require valves, meaning it doesn't need a camshaft, making these engines faster and more powerful.

Look up Piston in
Wiktionary, the free dictionary.