I.A.M.E. was founded by Argentina in 1952 out of the Institute Aerotecnica to produce tractors and motorcycles,[1] and built licensed copies of the Lanz Bulldog.

In 1959, Fiat purchased the factory and renamed it Fábrica de Tractores FIAT-Concord, and began producing Fiat-Concord tractors, which were licensed Fiats.

Perkins purchased the factory in 1961, and stopped building tractors in 1963.[3] 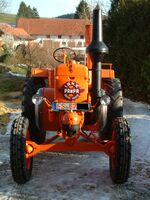 
Retrieved from "https://tractors.fandom.com/wiki/Pampa?oldid=211337"
Community content is available under CC-BY-SA unless otherwise noted.