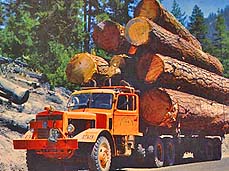 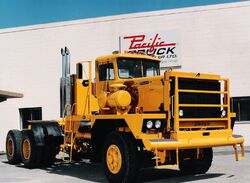 Pacific Truck & Trailer Limited was a Vancouver-based Canadian manufacturer of heavy trucks famed for their durability. Pacific built both highway and off road trucks, particularly for the logging industry, heavy haulers and fire trucks.

In 1947, three ex-Hayes Truck employees set up their own truck building shop, Pacific Truck & Trailer, and built their first truck in Vancouver. In 1967 the Pacific operation expanded and moved their production facilities to North Vancouver. In 1970, the business was sold to International Harvester. International managed worldwide sales, but left Pacific to the design and manufacture of the products; however some of the Pacific models featured International cabins.

In 1981, International Harvester sold Pacific Truck and Trailer to Inchcape Berhad of Singapore. In October 1991, the last Pacific truck was built and the manufacturing plant was closed and torn down, with only the parts department left in operation in Vancouver. In 1994, the remnants of the company was sold to Crane Carrier of Tulsa, Oklahoma, USA. Crane continued until 2002, selling the Pacific name, intellectual property and rights to Coast Powertrain of New Westminster, B.C., Canada.[1]

In addition to the Canadian and USA markets, Pacific was also selling to Australia, New Zealand and South East Asia. However, its most impressive order was for four ultra-heavy road tractors to pull massive loads up to 370 tons for the South African Railways. These units were delivered in 1972, featured 600 hp (450 kW) Cummins engines, and were known as the "largest on-highway trucks in the world". Sometimes they all worked coupled forming an extra-long road train, including an extra-capacity lowloader trailer to total 860 tons gross combination mass.

The well-known World War II M25 Tank Transporter (also known as Dragon Wagon) truck, commonly referred to as Pacific was not a product of Pacific Truck and Trailer but of Pacific Car and Foundry.

Retrieved from "https://tractors.fandom.com/wiki/Pacific_Truck_%26_Trailer_Ltd?oldid=182507"
Community content is available under CC-BY-SA unless otherwise noted.