Launched in 1991, the Optare Spectra is a double-decker bus body built on the DAF (now VDL) DB250 chassis.

The vehicle was developed as a joint project between Optare and DAF; based on the designs of the successful MCW Metrobus which Optare had purchased, but they are no means a restlyed Metrobus. With the launch of the DB250LF chassis sometime after production commenced, the Spectra was built to low-floor specification, and was one of the first low-floor double deckers available in the United Kingdom. The design is notable for the exclusion of a lower deck rear window, a practice that has become more commonplace. The bus typically seated 47 on the upper deck and 28 on the lower deck in single-door format.

A large batch was supplied to Reading Buses, UK, including the first production model (fleet number 701); many are still in operation with Reading Buses today.

London Central also received a batch of 25 of these, one example had a dual door layout and the rest had a single door arrangement.

The first low floor example of the Optare Spectra entered service with Peters, Bristol, more commonly known as Abus, at 0650 on Wednesday 4th February 1998. This saw R222 AJP becoming the first low floor fully accessible double deck bus to enter service in Great Britain. It was only by chance that Peters found out that West Midlands were planning to launch their Spectra at midday the following day, when he went to pick up the Spectra from Arriva Bus & Coach, allowing it to be prepared and be ready for service the following morning.

National Express received the first two low-floor Spectras in 1998, allocating one to Travel West Midlands and one to Travel Dundee, with registrations of R1 NEG & R2 NEG, their original fleet numbers being 1 & 2. They entered service on 15th January 1998, with branding reading Britain's first "Low Floor Low Emissions Easy Access Double Decker" (1) (1 in Birmingham City Centre 11/2/1998) and Scotlands's first "Low Floor Low Emissions Easy Access Double Decker" (2) (2 in Travel Dundee Garage 1/6/1999). A batch of 20 buses were purchased in 1999, and allocated to Travel West Midlands, to upgrade route 50 (Birmingham - Druids Heath) from Scania N113DRB operation. R2 NEG was also transferred to Travel West Midlands in August 1999 so all the National Express' Spectras were operated by Travel West Midlands, where 1 & 2 were re-numbered 4001 & 4002 to give them the same fleet numbers as the rest of the Spectras. All are still in operation, apart from 4014 (T414 UON) which was destroyed by fire in 2001 (4014 withdrawn 2001). They were replaced on the 50 in late 2001 by Volvo B7TL/Alexander ALX400s. They are now seen in Wolverhampton, after they transferred there in the summer of 2009, to replace the final MCW Metrobuses allocated at Wolverhampton Garage.

Production of the Optare Spectra ended when the last two rolled off the line in late 2005. 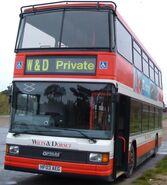