ÖAF was created by Fiat in 1907 and is now part of the German MAN group. The manufacture of automobiles began in the new purpose built plant in Vienna in 1908, with only 50 employees. A truck of 4 tonnes, similar to the Italian Fiat model was manufactured from 1911. They were originally sold as Austro-Fiat, but during World War I OAF began to develop their own products.

In 1925 the brand was transformed and was the Austro-Fiat partnership expired and the company became Osterreichische Automobil Fabrik AG, under the abbreviated ÖAF with preservation of the mark trade mark filed earlier. Also in 1925, a separate company took over sales of Italian FIAT cars, and Austro-Fiat became affiliated with Austro-Daimler and Puch. The last private car, Type 1001A, was different from the earlier Type 1001, having 34bhp engines and conventional rear axles.

The last model of Fiat's truck was the TS 1924, equipped with a Fiat engine with a power of 45 HP. The former Austrian subsidiary of Fiat began production of other models in Austria, which has enabled the company to begin developing its own models. The most popular offered in 1925 was the light vehicle sales itinerant AFN with 1.75 tons of payload. This retained the same mechanics and Fiat engine 4 cylinders of 2850 cm3, 42 HP, the use of gimbals and real tires, not solid tires, which allowed a speed of 65 km / h. Then in 1928, appeared the AF2 and the year following the Austro-Fiat-1001, a bus. It is from this time that the company discontinued the manufacture of passenger cars to concentrate on commercial vehicles (trucks, vans and buses). Are thus appeared set AFL / AFY manufactured 1930 to 1937.

In 1936, when Austria was invaded by the armies of the Third Reich, German MAN obtained the majority of shares owned by Fiat in ÖAF, but the Italian manufacturer still possesses more than 15%. ÖAF began equipping some of its trucks with engines diesels from MAN in 1934. In 1936, they entered into a license for diesel engines with MAN.

After the Second World War, Floridsdorf was in the Russian zone and the plants were required to make War reparations to the Russians. In 1955 ÖAF was released from these payments and the factory began producing trucks again. They proposed a plan to build military trucks for the Austria Army, but they eventually decided to choosing rival Steyr Pinzgauer truck. The ÖAF Tornado did become, the best-selling truck in Austria.

In 1970 the company was privatized again, MAN then let it merge with Gräf & Stift, out of which ÖAF Gräf & Stift arose, which in 1971 was then fully taken over by MAN.

Since the 70s, all MAN trucks sold in Austria got an ÖAF-grille. ÖAF is however mainly extra special and heavy trucks. 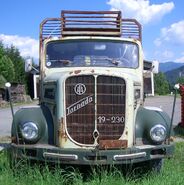 1977 ÖAF light wheeled tank
Add a photo to this gallery

Based on the Wikipedia (translation).

Retrieved from "https://tractors.fandom.com/wiki/OAF?oldid=182623"
Community content is available under CC-BY-SA unless otherwise noted.