MTL were a notable buyer, a batch of high-specification Palatine IIs entered service in 1996 on the 'Cross River' services through the Mersey Tunnels. Another batch of 22, branded as 'The Millennium Fleet' began operating on Merseyside in 1998.

It was superseded by the Plaxton President body. 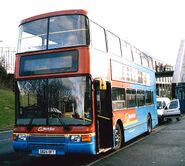 A DAF DB250 with Palatine II bodywork, new to Metrobus in 1995, converted to an open top bus for the Cambridge City Sightseeing Tour
Add a photo to this gallery


Retrieved from "https://tractors.fandom.com/wiki/Northern_Counties_Palatine?oldid=184740"
Community content is available under CC-BY-SA unless otherwise noted.