The Nissan Presage is a large MPV produced by Japanese automaker Nissan since 1998. The Presage is only officially sold by Nissan in Hong Kong, Singapore, Brunei and Japan.

The name "Presage" is French for "anticipation".[1]

The first generation Presage was launched by Nissan in June 1998 as a competitor to the Honda Odyssey and Toyota Estima. It was available with either seven or nine seats. The biggest share of components was taken from the Nissan R'nessa, although it also has elements in common with the previous generation Nissan Bassara.

All rear seats can be folded, although only those in the second row can be removed. After the restyling in 2001, the Presage got a new trim level called Highway Star.

The 2WD models feature the new Electronic Braking Force Distribution (EBD) system that uses electronic control to optimally distribute braking force to the front and rear wheels according to changes in the payload (number of passengers) being carried. This system works in tandem with the Braking Assist system (a brake booster with a two-stage mechanical assist mechanism plus ABS) to achieve synergies between effective utilization of front and rear braking force (EBD) and reduced pedal pressure (Braking Assist). As a result, more powerful braking performance is obtained with less pedal pressure in emergency braking situations even when carrying a large payload. The 4WD models also provide the nearly same high level of braking performance by adopting a load sensing valve (LSV) as a mechanical braking force distribution system in a set with the Braking Assist system.[2] 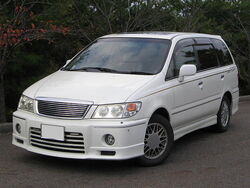 The second generation Presage debuted in 2003 with a transformable seven or eight seat configuration. Rear side doors were changed from swinging to sliding. The new Presage is built on the L-class platform, which is also used for the Teana mid-size car.

Engines are also taken from the Teana, a 2.5-litre four-cylinder and a 3.5-litre V6 gasoline engine. These engines are mated with a four-speed automatic transmission or a sequential CVT.

The main advantage of the second generation of this Japanese car is its comfortable and transformable interior. For easier reversing, there is a rear view camera. As before, a sporty trim level dubbed Highway Star was available. It was not a familiar sight on Japanese roads and was axed from the popular Nissan minivan line up, however the equally unpopular Lafesta model was kept in the lineup.