In 1848, John Nichols opened a blacksmith shop in Battle Creek, Michigan.[1] In the blacksmith shop, John Nichols began making various farm tools for local farmers. He built his first thresher/separator in 1852.[1] The business was successful from the start, so successful that some time in the 1850s he took on a partner by the name of David Shepard.[1] Together they formed a partnership known as Nichols, Shepard and Company which manufactured farm machinery, steam engines and mill machinery.[2] The first thresher/separator of small grains (largely wheat and oats) was developed in about 1831 by the Pitts brothers—Hiram and John Pitts of Buffalo, New York.[3] However, this early thresher, called the "ground hog," was quite unlike the conventional thresher/separators that developed since that time. For instance, the ground hog's separating unit was largely a slatted apron which pulled the grain across a screen.[2] John Nichols and David Shepard realized that the apron style separator was not a technology that was going to work. Consequently, in 1857, the Nichols and Shepard Company developed the first "vibrator" separating unit for the small grain thresher.[2] This vibrator-style of separator soon became universally adopted by all other thresher/separator manufacturers. The Nichols and Shepard Company received a patent from the United States government for their "Vibrator" grain separator on January 7, 1862.[2] The company also obtained a number of other patents for other advances in the thresher/separator technology, for original improvements in steam engine traction technology.[2] During the 1920s, the Nichols and Shepard Company developed a successfully functioning corn picker. Following the acquisition of the Nichols and Shepard Company by the Oliver company. This corn picker became the forerunner of the famous Oliver cornpicker.[4] 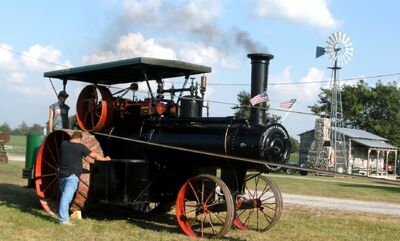