The New Noble company was a Canadian company that marketed products that they built, as well as sourced from other manufacturers. They were known for their tillage equipment and swathers. The swathers were manufactured by Western Combine, and the hay balers they sold were built by Vicon. The company has its roots in the Noble company, which was purchased by Versatile.

Noble was a Canadian company that manufactured tillage equipment. It was purchased by Versatile, another Canadian company, in 1979 to extend Versatile's products. They were marketed for a time as Versatile Noble.[1] The tillage division was later spun off as New Noble, possibly when Ford Tractors purchased Versatile. 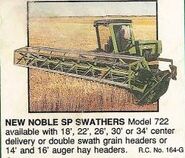