The Ner-a-Car was a type of feet forwards motorcycle designed by Carl Neracher in 1918. Around 6,500 Ner-a-Cars are believed to have been produced between 1921 and 1927 in England, and about 10,000 Neracars (note different spelling) in the USA. They were manufactured in England by the Sheffield-Simplex company and the Ner-a-Car Corporation in the United States. 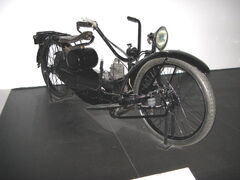 The design had several unusual features, including an infinitely-variable friction drive transmission, and a low-slung perimeter frame chassis that was closer to those found on contemporary cars than other motorcycles. It also featured the first production example of hub-center steering on a motorcycle.[1]