NSU Motorenwerke AG, normally just NSU, was a German manufacturer of automobiles, motorcycles and pedal cycles, founded in 1873. It was acquired by Volkswagen Group (VW) in 1969. VW then merged the company with Auto Union, to eventually evolve into Audi as it is known today.

NSU originated as a knitting machine manufacturer established in 1873 by Christian Schmidt, a technically astute entrepreneur, in the town of Riedlingen on the Danube.[1] The business relocated in 1880 to Neckarsulm, where the river Sulm flows into the Neckar.[2] There followed a period of rapid growth and in 1886 the company began to produce bicycles, the first of them branded as the "Germania", and by 1892, bicycle manufacturing had completely replaced knitting machine production. At about this time, the name NSU (from Neckar and Sulm) appeared as a brand name.

During World War II NSU designed and produced the Kettenkrad, the NSU HK101, a half-tracked motorcycle with the engine of the Opel Olympia.

In December 1946 Das Auto reported the company had resumed the manufacture of bicycles and motor-bicycles at Neckarsulm.[4] For Germany this was a time of new beginnings: in July 1946, a new board had been appointed, headed up by General Director Walter Egon Niegtsch, who earlier in his career had spent 17 years with Opel.[4]

NSU motorbike production restarted, in a completely destroyed plant, with pre-war designs like the Quick, OSL and Konsul motorbikes; furthermore, the HK101 continued to be sold by NSU as an all-terrain vehicle in a civilian version. The first post-war model was the NSU Fox in 1949, available in a 2-stroke and a 4-stroke version. In 1953 the NSU Max followed, a 250 cc motorbike with a unique overhead camdrive with connecting rods. All these new models had an innovative monocoque frame of pressed steel and a central rear suspension unit. Albert Roder, the chief engineer behind the success story, made it possible that in 1955 NSU became the biggest motorcycle producer in the world. NSU also holds 4 world records for speed: 1951, 1953, 1954, and 1955. In August 1956 Wilhelm Herz at the Bonneville Salt Flats, Utah, became the first man to ride a motorcycle faster than 200 mph (322 km/h).

In 1964 NSU offered the world's first Wankel engined car: the Wankelspider. In development of the project, NSU built the Sport Prinz, with a 129 hp (96 kW) 995 cc (60.7 cu in) 2-rotor.[7] In the same year Prinz 1000 and derivatives like the TT and TT/S followed. The Typ 110 (later called 1200SC) was launched in 1965 as a family car with a more spacious body design. The last NSU cars with a conventional four-stroke engine had the air-cooled OHC four-cylinder engine in common. The car was marketed in the U. K. as “NSU TYP 110”, and Karobes, a major supplier of car accessories, provided a head rest specially for this car: “A new one which can be fitted without a screw, and may be adjusted forwards and backwards.”[8]

In 1967, the four-door NSU Ro 80, with a 115 hp (86 kW) version of the same 2-rotor,[9] was presented to public. Weighing 2,600 lb (1,200 kg), it had a Cd of 0.36, disc brakes, independent suspension, and front wheel drive by Fichtel & Sachs Saxomatic three-speed transmission.[9] It soon gained several design awards such as "car of the year 1967", while drivers liked its performance.[9] Virtually all the world's major motor manufacturers purchased licenses from NSU to develop and produce the rotary engine, with the notable exception of BMW.[10]

Despite its public acclaim, sales of the Ro 80 were disappointing. The transmission drew complaints and the engine suffered numerous failures even at low mileage.[9] Competitor automakers, apart from Mazda, held back from taking a lead in developing and marketing the Wankel technology, and anticipated income associated with those royalty deals failed to materialize.

The development of the rotary engine was very cost-intensive for the small company. Problems with the tip seals of the engine rotor significantly damaged the brand's reputation amongst consumers. In 1969, the company was taken over by Volkswagen Group, who merged NSU with Auto Union. The new, merged, company was called Audi NSU Auto-Union A.G and represented the effective end of both the NSU and DKW marques with all future production to bear the Audi badge (although retaining the four interlocking circles of Auto Union). The management of the Neckarsulm plant moved to Audi's headquarters in Ingolstadt. When the small rear-engined NSU models (Prinz 4, 1000, 1200) were phased out in 1973, the Ro 80 was the last car still in production carrying the NSU badge. Audi never made use of the brand name NSU again after April 1977, when the last Ro 80 was sold.[9]

Even as production of the Ro 80 continued in the Neckarsulm plant, production of larger Audi models like 100 and 200 was started. The Porsche 924 and later Porsche 944 were also assembled at Neckarsulm. Those models were joint venture projects of Porsche and VW, but Porsche did not have the internal capacity to build the 924 and 944. Currently, Neckarsulm is the production plant for Audi's topline vehicles like A6, A8 and R8. It is also the home of the "Aluminium- und Leichtbauzentrum" where Audi's aluminium-made space frame bodies are designed and engineered.

NSU is primarily remembered today as the first licensee and one of only three automobile companies to produce cars for sale with rotary Wankel engines. NSU invented the principle of the modern Wankel engine with an inner rotor. The NSU Ro 80 was the second mass-produced two-rotor Wankel-powered vehicle after the Mazda Cosmo. In 1967, NSU and Citroën set up a common company, Comotor, to build engines for Citroën and other car makers. Only Mazda continued developing the Wankel engine. Mazda currently has a sportscar, the RX-8, in its portfolio using the Wankel engine family.

A museum in Neckarsulm, the Deutsches Zweirad- und NSU-Museum, has many of NSU's products on display.

In the early 1970s, NSU manufactured a vertical-crankshaft small engine for use as a lawn mower power unit.[11] 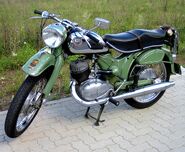 The NSU Quickly was the most popular moped of its time.[citation needed] It was produced between 1953 and 1966 in over 1,000,000 examples and still can be found today all over the world as more than 60% were exported.