The history of NCK company of Chapletown, Sheffield, in England, goes back to 1794 and is one of the first major Engineering companies. The Company is actually called "Newton Chambers & Co. Ltd" with NCK being a brand name. Newton Chambers started life as Iron founders, expanding the range during the Victorian times.

It was in 1789 that George Newton and Thomas Chambers entered into a partnership that would result in the founding of one of England's largest industrial companies of that era, Newton, Chambers & Co.

George Newton was a businessman, Thomas Chambers a craftsman in iron and their partnership had the aims of smelting and casting iron, in various forms. In 1792 they bought the mining rights to the Thorncliffe valley from the Earl Fitzwilliam and set up their works on the Thorncliffe site near Chapeltown, to the north of Sheffield.

In 1815 the partners met with William Murdoch, the inventor of coal-gas lighting, this being seen as providing a growth in work for their foundry. Coal, from the company’s mines, was provided as charge for beehive coke ovens which were built on the site.

By the end of the nineteenth century the company were not only mining coal and ironstone but building blast furnaces, coke ovens and chemical plant. Heavy section iron, cast in the foundry was used in two iconic structures: Tower Bridge, crossing the river Thames in London and the Eddystone Lighthouse.

In 1939 the Thorncliffe works came under the control of the Admiralty. A new workshop was constructed at Warren Lane, a short distance away from the Thorncliffe works, which was used to build army vehicles and became the largest manufacturer of Churchill tanks for the war effort. The infamous traitor, William Joyce (Lord Haw Haw), in one of his radio broadcasts threatened to "dot the I" on the Izal name with a bomb. It was intended to destroy the source of the Churchill tanks. A near miss ensued, but the works remained intact.

The nationalization of the coal and steel industries in 1948 saw the group sell off its interests in these fields but many others remained, in particular tar distillates, the basis of many products manufactured by its Izal subsidiary.

The engineering part of the group designed and supplied coal-gas and chemical plant and with the take over of Ransomes & Rapier, in 1958, to add to its portfolio became a major maker of excavators, drag-lines and other construction equipment. The group also set up Redfyre as a marketing company for coal-burning grates which were made in its foundry. Changes, in particular the Clean Air Act saw the company move into light fabrications and oil-fired central heating equipment, however, the oil-fired boiler market collapsed in autumn 1973 with the sudden large increase in oil prices.

In 1972 the group was taken over by industrial holding company "Central & Sheerwood".

The NCH Brandname years and its company history

The company decided to go into excavator production during the 1930s to utilise there foundry capacity and engineering skills. They negotiated with P&H (Pawling and Harnischfeger)of America, to build under licence the P&H 150, a ½ cubic yard Universal excavator. This being known as the NCH. It was fitted with a D4 Caterpillar engine, and mechanical controls. Hydraulic controls being fitted from 1940. All machine went to the War Office.

Later they built versions of the P&H 125 & 150, thus being sold as NCH 125 & NCH 150. Basically the same machine with different tracks 14" or 16" and 38hp or 50hp engine respectively. The could be configured for Crowd shovel,Trencher, or skimmer, crane, Dragline or grab excavator operation, hence the 'Universal' tag. In 1946 the License from P&H expired, thus ending production. A new factory was built in 1938/9 for excavator production, but the second world war saw it being used for tank production. After the war it was switched to Excavator production to meet demand from rebuilding works. Some of this factory complex still stands today, the whole Newton Chambers site being 750 acres, just a few miles north of Sheffield next to the M1 motorway. A large part has been redeveloped, with TCH (JCB)Ltd having a dealership on part of the site.

The NCK Brandname Years and its originEdit

In 1947 they negotiated to build Koehring excavators from America, thus creating the NCK brand. The first being the 304, which was re-engineered for UK production, with various Engine options from Thornycroft, GM, Dorman, Rolls Royce, AEC or Gardner available. The Std option being the Dorman 66hp unit.

The Ransomes and Rapier yearsEdit

In 1958 they took over Ransomes & Rapier based in Ipswich, England. production being moved to the Ipswich factory were the Ransomes & Rapier Walking Draglines, were produced, with the R&R designed cranes dropped, in favour of the NCK models, thus becoming NCK-Rapier machines.

The 1980s to present dayEdit

In February 2012 NCK Cranes was acquired by Delden CSE Ltd, from its prior owners SPW Group.

Recently the Delden CSE Ltd company will continue to supply spare parts for and overhaul NCK machines from its premises in Selston, Nottinghamshire, UK.

From the WIKIPEDIA Sourced Information and updates October 2018

NCK (Newton Chambers Koehring), started as a subsidiary of Newton, Chambers & Company, a large engineering company based in Sheffield, England. They produced the range of NCK agricultural equipment, skimmers, excavators,cranes and draglines that were renowned for high quality and long life, typically over 20 years. Many NCK machines continue to operate worldwide.[1]

The company started as iron founders in 1794 and expanded in Victorian times to include coal and iron mining. They diversified into equipment manufacture and in 1947 the company started producing the American brands of Koehringexcavators under the Newton Chambers Koehring, name, NCK [2] and in 1958 they took over Ransomes & Rapierbuilding excavators, drag-lines, port cranes and other construction equipment under the NCK - Rapier brand . With the decline in coal and the improvements in hydraulic machines, the company diversified into light fabrication. The company was taken over in 1972 by the holding company Central and Sheerwood. NCK later was sold to Robert Maxwell's media group as part of a wider deal, but Maxwell was not interested in cranes and NCK became inactive. Cliffe Holdings then bought the company, later Staffordshire Public Works bought the company in 1997 after it fell again into receivership. NCK launched a new model, the 90T 'HC90 'Astra crane in 2000 but it was not successful, 3 units were manufactured and are owned by Delden CSE Ltd as part of their hire fleet. The only other UK crawler crane business Ruston-Bucyrus, RB also stopped manufacture in 2009. The last crawler crane supplied by NCK was a Nova in 2001. SPW now runs and active spares and overhaul business for its cranes [3] and fabricates NCK plant to order as well as manufacturing traffic control and filtration equipment.

Please add any known machines to the list below. 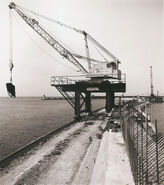 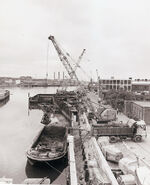 Retrieved from "https://tractors.fandom.com/wiki/NCK?oldid=222152"
Community content is available under CC-BY-SA unless otherwise noted.