Multidrive was founded by David J.B. Brown to develop a concept of all wheel drive for Semi-highway trucks after his ADT building company DJB (later called Artix) which was sold to Caterpillar. He later bought the former Bedford trucks business and renamed it as AWD Engineering Limited. The company was a division of the Brown Group. The company was based in Thirsk,[1] but the Tractor Division is now in Andoversford, Gloucestershire, while Multidrive Trucks are based in Redditch in the West Midlands. Note:David J.B. Brown has no connection with the David Brown of David Brown Tractors and Aston Martin

Multidrive Ltd was original formed in 1983 by its Managing Director, David J.B. Brown, as a division of the Brown Group of Companies - which also included BDE Ltd, Artix Ltd and DJB Ltd. When the DJB and Artix operations were sold to Caterpillar in 1996, the Multidrive operation was retained.

The Multidrive concept was first tried with a heavy duty version of Articulated lorry tractor units and a permanently fixed trailer fitted with driven boggie to give a 10x8 drive truck. The Idea was developed for an Army logistics contract in the late 1990's but was not taken up initially.

The MOD latter tendered an Urgent Supply requirement contract for support vehicles and Fuel tankers to operate in Kosova. Which was won by Multidrive due to the short lead time and performance requirements. The Experience gained when running AWD (Formerly Bedford Commercial Vehicles) had paid dividends as they were experienced in supplying the Government with vehicles.

The firm built a fleet of trucks for the army at their facility in Thirsk, North Yorkshire, which was expanded to cope with the contract.[2]

After a four-year research, development and testing programme the robust M8-35 tractor/trailer unit and the 35 tonne capacity Multi Load Ejector (MLE) body, capable of a 15 second safe, controllable ejection, was launched. Examples were used on a Road building contract in Scotland were the longer haul routes and the creation of the sub-base formed a suitable high speed route from the source of crushed material to the sites requiring fill and crushed road stone to form the pavement base layers.[3]

The Death of the founder David J Brown in 2004 in a road accident near his home in Thirsk, North Yorkshire at the age of 74 had a devastating effect on the company.[4] With this loss of the driving force behind the idea the company faltered. A move to Gloucester failed to halt the decline, and in February 2006 the business was put up for sale by Grant Thornton.[5]

﻿Multidrive Trucks was purchased in 2007 by Dr. Li Qu, appreciative of David Brown's engineering expertise, Dr Li was also involved with AWD and Bedford Trucks in it's later stages. Multidrive Trucks continue to support existing customers and users in South Africa and Sudan. Multidrive are determined to expand the 'Multidrive Truck' manufacturing model to suit todays global markets, and are working with several international truck manufacturers to bring 'economies of scale' to the product range. Particular emphasis is placed on the M8-40 spined tractor-trailer combination especially when used in conjunction with customised bodies to suit logging, mining, and landfill applications

The Kelland Group rescued Multidrive Tractors Ltd, as it fitted in with their existing Sprayers business and had decent user base for its spare parts operation which fitted with their other business interests. They paid about £150-180,000 for the parts operation and stock and design rights. They then found the firm had developed a hybrid cross between a truck and a tractor similar to a Unimog for on-off highway applications like spreaders and sprayers, and had orders for 3 machine for Carrot haulage in Australia.[6]

Kelland had previously purchased the Frazier Sprayers business in 2004, and the two operations complement each over in some areas, with the Frazier sprayer units fitting onto the modern Mulitidrive Chassis, in place of using adapted tractor skid units.

Mulitidrive sold about 20 units in the previous year (2005/6) and Kellands hope to double that over time according to reports in the farming press.[7] 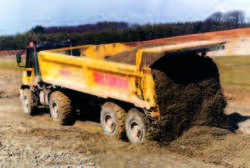 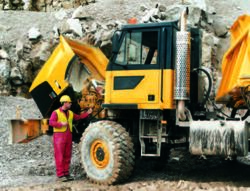 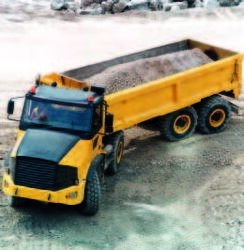 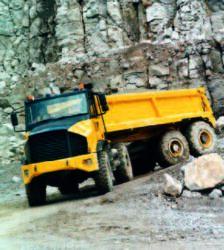 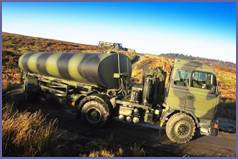 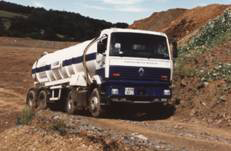 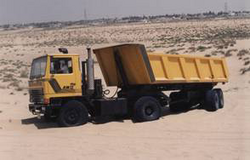 Multidrive Water Tanker
Add a photo to this gallery

Retrieved from "https://tractors.fandom.com/wiki/Multidrive?oldid=213635"
Community content is available under CC-BY-SA unless otherwise noted.