A motorcycle frame includes the head tube that holds the front fork and allows it to pivot. Some motorcycles include the engine as a load-bearing, stressed member. The rear suspension is an integral component in the design. Traditionally frames have been steel, but titanium, aluminium, magnesium, and carbon-fibre, along with composites of these materials, have been used. Because of different motorcycles' varying needs of cost, complexity, weight distribution, stiffness, power output and speed, there is no single ideal frame design.[1]

The frame is mass-produced by sheet metal pressed or stamped into shape. Typically a single-cradle structure is used.

The motorcycle engine is held in a single cradle with a single spine.

The motorcycle engine is held in a double cradle with a single spine and single downtube.

The motorcycle engine is held in a full by two separate cradles, normally with a single spine.

The motorcycle engine is suspended from a single spine. 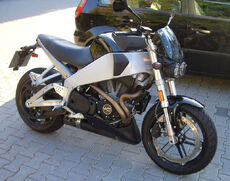 Twin beams join headstock to swingarm pivot in as straight and short a line as possible.

Supports structural load using the external skin of the frame.

Similar to the beam frame, connecting the steering head and swingarm pivot point directly as possible. The frame is made up of a large number of short steel (or aluminium) tubes welded together to form a trellis.

Engine as a stressed member

For rider comfort, a motorcycle's engine can be mounted on rubber bushings to isolate vibration from the rest of the machine. This strategy means the engine contributes little to frame stiffness, and absorbing rather than dissipating vibration can lead to stress damage to the frame, exhaust pipes, and other parts.[1]

Instead, if the engine is rigidly mounted to the frame, vibrations pass to and are dissipated via the whole frame, and the rider. Rigid mounting allows the engine to contribute to the overall stiffness of the frame. It also becomes possible to mount the swingarm directly to the engine rather than the frame, avoiding the need for frame members extending downward to the swingarm pivot. By increasing the number of mounting points between the engine and frame, vibrations and stress can be better dissipated in the frame, typically creating a triangle between the swingarm in the rear, the cylinder head at the top and the lower crankcase area at the front. If a rigidly mounted engine not only contributes to, but is critical to, the stiffness of the frame, and is an integral part of closing the triangle or trellis structure that transfers force from the headstock to the swingarm, to the point that without the engine the frame would be deformed, the engine is called a stressed member, or a lifted engine. Sharing the load between the engine and frame reduces the overall weight of the motorcycle.[1]

During early testing of the 1983 Kawasaki GPZ900R, twin downtubes were included, creating a full cradle, but the downtubes were found to carry little load, so they were removed, relying entirely on the combination of the steel backbone and engine for chassis rigidity.[4] BMW's R1100 series twins of 1994 relieved the frame of stress entirely, with the engine carrying the total load from the front Telever fork to the rear Monolever.[5][6]