The Morris Eight was a small car inspired by the sales popularity of the similarly shaped Ford Model Y. The success of the car enabled Morris to regain its position as Britain's largest motor manufacturer.

The car was powered by a Morris UB series 918 cc four-cylinder side-valve engine with three bearing crankshaft and single SU carburettor with maximum power of 23.5 bhp (17.5 kW). The gearbox was a three-speed unit with synchromesh on the top two speeds and Lockheed hydraulic brakes were fitted. Coil ignition was used in a Lucas electrical system powered by a 6 volt battery and third brush dynamo.

The body which was either a saloon or open tourer was mounted on a separate channel section chassis with a 7 feet 6 inches (2.3 m) wheelbase. The tourer could reach 58 mph (93 km/h) and return 45 miles per imperial gallon (6.3 L/100 km/37 mpg-US); the saloons were a little slower. The chrome-plated radiator shell and honeycomb grille were dummies disguising the real one hidden behind. In September 1934 the bare chassis was offered for £95.[2] For buyers of complete cars prices ranged from £118 for the basic two-seat tourer to £142 for the four door saloon with "sunshine" roof and leather seats.[2] Bumpers and indicators were £2 10 shillings (£2.50) extra.

Compared with the similarly priced, but much lighter and longer established Austin 7, the 1934/35 Morris Eight was well equipped.[2] The driver was provided with a full set of instruments including a speedometer with a built in odometer, oil pressure and fuel level gauges and an ammeter.[2] The more modern design of the Morris was reflected in the superior performance of its hydraulically operated 8 inch drum brakes[2]. The Morris also scored over its Ford rival by incorporating an electric windscreen wiper rather than the more old-fashioned vacuum powered equivalent,[2] while its relatively wide 45 inch track aided directional stability on corners.[2]

The Series I designation was used from June 1935 in line with other Morris models, cars made before this are known as pre-Series although the official Morris Motors designation was by the model year (35) even though they were introduced in October 1934. Of the 164,102 cars produced approximately 24,000 were tourers.

In 1938 the car was updated with a slight restyle to match the other cars in the Morris range. Changes included painted rather than plated radiator surrounds and disc (Easiclean) wheels replaced the previous "Magna" wire spoked ones.[2] The engine and running gear were unchanged.[2]

The Series E brought a major restyle with a "waterfall" dummy grille, headlights in the wings and the running boards had gone. The car was longer, wider and heavier but the wheelbase was actually 1-inch (25 mm) shorter at 7 feet 5 inches (2.3 m) The "alligator" bonnet was now rear hinged making engine access poor. The engine was upgraded to the USHM type getting a new cylinder head, still side-valve however, the unit being very similar to those used in Series 1 and 2 cars. Increased power to 29 bhp (22 kW) was now available and the crankshaft was counterbalanced and fitted with shell-type bearings. The gearbox was now four-speed with the Lucas electrics remaining at 6 volts, but now with automatic regulation of the dynamo in a two-brush system. Top speed was around 58 mph (93 km/h).

Production continued through the war for the military, essential civilian use and some export. Post-war general production restarted in 1945 but there were no more tourers made in the UK. In Australia, however, a flourishing body building industry continued to provide tourer versions on imported chassis/mechanicals.

The engine went on to be used, with very minor changes, in the Series MM from 1948 till 1953 Morris Minor and was also adapted as an auxiliary power unit in Centurion, Conqueror and Chieftain tanks. Morris also used this engine as the basis of special Marine and Stationary power plants.

There was a van version of the Series E rated at 5 cwt capacity and called the Z Series. It was first produced in 1940 and outlived the saloon, ceasing production in about 1953 when the engine was phased out.

A very similarly styled Wolseley Eight was also prepared in the 1930s and offered after 1945. An original 1939 prototype survives, having for many years been owned by Lord Nuffield himself.

A Number of restored examples can be seen in the UK at Classic vehicle shows and in some motor nueums. 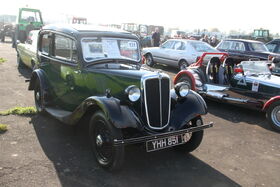 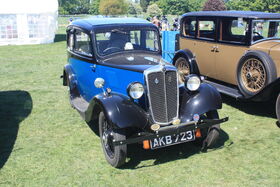 AKB 723
Add a photo to this gallery

Retrieved from "https://tractors.fandom.com/wiki/Morris_Eight?oldid=155793"
Community content is available under CC-BY-SA unless otherwise noted.