View source
watch 01:40
The Sandman Will Keep You Awake - The Loop
Do you like this video?
Play Sound
For the Ford Meteor as an automobile model available from 1981 to 1993, see Ford Meteor.

Meteor was a marque of automobiles offered by Ford in Canada from 1949 to 1976. The make was retired for the 1962 and 1963 model years, when the name was used for the Mercury Meteor sold in the United States. It succeeded the Mercury 114, a Canadian-market Mercury based on the Ford, the "114" name being taken from the car's wheelbase.

It complemented the Mercury, and gave Canadian Mercury-Lincoln dealers a car to sell in the low-price market, against the Canadian Pontiac. Similarly, Canadian Ford dealers offered the Monarch, a car based on the Mercury to compete against the Oldsmobile. This was due to the dealer structure in Canada, where smaller communities might have only a single dealer who was expected to carry a full line of models in both the low and mid price classes. From 1949-59, Meteor typically ran fourth in overall sales, behind Chevrolet, Ford and Pontiac.

The initial 1949 Meteor was introduced on June 25, 1948, at the same time the Ford Deluxe and Custom series were introduced across North America, and shared the new postwar fullsize Ford bodies, chassis and powertrains but with unique trim. It used a Mercury grille and was powered by a 100 bhp (75 kW), 239 CID flathead V8 similar to that used in 1946-53 U.S. Ford passenger cars. Meteor, as well as the Canadian Ford, kept the flathead V8 engine through 1954. The new OHV V8 which US Fords offered beginning in 1954 was not introduced in Canada until the 1955 model year. The following year Ford of Canada introduced a 6-cylinder engine for Canadian Ford and Meteor cars. Meteor models continued to use the Ford body with unique items such as grilles, taillights and moldings. The 1952-54 Meteors used Mercury instrument panels and dashboards. In mid-1954 some Niagara and Rideau models began using Ford instrument panels and dashes. These cars were named Niagara Special and Rideau Special and were priced around $67CDN less than regular Niagaras or Rideaus.

In 1954 Meteor changed to its own series names. The entry-level car was called just Meteor, replacing Ford's Mainline series. The mid-level Customline became the Niagara while the top trim level changed from Crestline to Rideau. A rebadged, Canadian-built version of the Ford Ranchero, the Meteor Ranchero, was added in 1957, and would continue to be produced until 1959.[1] The "Montcalm" series was added in mid-1959 as a counterpart to Ford's new Galaxie models.

Meteor was discontinued after 1961 for a number of reasons. The Meteor name had been selected for Mercury's new intermediate model beginning in 1962, and Mercury itself had been dropped down in price due to slow sales and the discontinuation of the Edsel.

Due to dealer pressure, however, Ford released a lower priced "Mercury 400" in 1963 that stood in the price bracket formerly occupied by the Meteor. When the intermediate Mercury Meteor was dropped after 1963, Ford of Canada relaunched Meteor as a standalone make in 1964, and dropped Mercury's Monterey series in Canada. The 1964 Meteor looked nearly identical to the 1964 Mercury, save for its Ford dashboard and interior, and was available in a base and Custom series. For 1965, the full range of model names that had existed in 1961 returned: Rideau, Rideau 500 and Montcalm. The Montego was added as a top range model for 1967, but when that name was selected for use by Mercury in the U.S. beginning in 1968, it was renamed LeMoyne, and continued through 1970. A sport themed Montcalm S-33 model was available from 1966-70.

Although Meteor was still considered as a separate marque through 1976, after 1968 the cars also carried Mercury badging and were advertised as the "Mercury Meteor". After 1976, the Rideau 500 and Montcalm names as well as the unique trim items were dropped. The Meteor name was then used on a lower priced variant of the Mercury Marquis, called the Mercury Marquis Meteor, built until 1981. 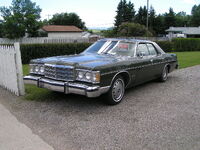