The Mercedes-Benz Actros is a heavy duty truck introduced by Mercedes-Benz in 1996. It is normally used for long-distance haulage, heavy duty distribution haulage and construction haulage. It is available in weights starting at 18 tonnes[citation needed] and is powered by a V6 or V8 cylinder diesel engine with turbocharger and intercooler. Daimler Trucks/Lorries launched the version II of the Actros in 2002.[citation needed]

The second Actros generation comes with an electronic sequential gearbox that Mercedes-Benz has dubbed the "Telligent Gearbox". It pushes forward the principle used in some earlier Mercedes-Benz tractors; using the gearshift lever to command a pneumatically actuated system that changes the gears. The Telligent gearbox utilizes a computer, together with a load-sensing system on the fifth-wheel coupling, to estimate the proper gear that the truck must be in. For example, if you want to upshift, the computer estimates the load on the tractor and the current engine mode, and gives you the proper gear for decreasing engine RPM. On the other hand, if you want to downshift, the computer assumes you wish to overtake, and gives you a proper gear for acceleration.

There's an automatic version which works like the Tiptronic system found in Mercedes-Benz cars.

The system consists of a small lever mounted under the right armrest and a flat switch underneath. The lever is slightly tilted, so that it matches the natural curve of the driver's hand when it's on the armrest. The lever has two buttons on either side. When at a standstill, the driver must push the left button, then (while holding it), push the lever forward and release it. This always selects second fast. Then the driver could push the lever forward once again to select fourth fast. The current gear is shown as a large number on the main display. After doing this, the driver steps on the clutch pedal and waits for approximately two seconds. After the gearshift has completed, a double click is sounded through the speakers, and the driver proceeds with pulling off as normal.

Once moving, the driver has two choices. He or she may push or pull the lever to let the computer choose the gear for them, or they can use the splitter switch (the small switch under the lever) to pre-select gears. Either way, the gear is selected first, then the clutch is depressed. For example, if you're in fourth fast, pulling the splitter switch up once pre-selects fifth slow.

The right button (known as the 'flush button', as it is flush with the lever) is used to switch to neutral.

Since the driver does not directly operate on the gearbox, it significantly reduces the wear and tear on the gearbox itself. The gearbox is fully synchronized, and in some models the computer would even blip the throttle for you for a smoother downshift. Also, it's great for novice drivers, who are not sure of the proper gear.dido gear box. The Actros is best described as a no-nonsense machine which can work extremely well in everyday road transport variation's once maintained properly and operated with an understanding of the vehicle's core design's.

The Mercedes Actros is 1 of the most desired truck's on the export market as they perform very well in high temperature's and humid condition's.

The cabin of the Actros is built with consideration for the driver. It provides a silent, smooth and pleasant ride. Pneumatic suspension of both the cab and the tractor itself makes for a really smooth feeling even on the roughest road. The high-roof sleeper version provides two bunks (the upper one not usable while driving, as the seats must be folded). The upper bunk is somewhat wider, but all the controls (radio, windows, auxiliary heater, etc.) are available from the lower bunk. However, most of the controls one would need (auxiliary heater, sunroof, etc.) while resting doubled overhead of the driver, and the width of the upper bunk allows for a person to use them by merely stretching their hand.

The auxiliary heater can be programmed to turn on, for example, 30 minutes before the driver enters the truck, so in the winter a driver would be able to enter a warm cab instead of waiting for it to warm up.

There are large storage spaces, especially in the MegaSpace cab. Additional storage spaces are available under the lower bunk. In some cab types there are boxes behind the doors, that open from the inside, but are accessible on the outside - for storing tools, lashing belts, ratchets, etc.

The driver seat is a fully adjustable Grammer pneumatically suspended seat, and the passenger seat only allows for backrest adjustment. The steering wheel is fully adjustable as well, and allows the driver to control functions of the on-board computer as well as the built-in radio/CD player and the bluetooth phone control.

Depending on model either Actros 1,2 or 3 the electronics may vary.For example the Braking System known as EPB or BS from Wabco incorporates ABS and ASR functions.This system is very reliable and efficient.The stopping distance in the Actros was drastically reduced as compared to it's predecessor the SK.In later models of Actros 2 and all Actros 3 models the braking System was improved to EPB 2.

There is a wide range of other electronic features, offered as extras. These include lane assist (warns the driver if they inadvertently leave their lane), Autonomous Intelligent Cruise Control ART (which engages the brakes if the vehicle in front suddenly stops), side looking radar for warning the driver about a vehicle in their blind spot, and many more, mostly oriented towards safety. All of them are marketed as "Telligent".

In some cases, when the electronics of the trailer (especially the ABS sensors in the wheels) get wet, the brake pedal would not operate as normal, and even the slightest touch would result in a wheel-lock. There are problems with the calculation of the mileage available for the remaining fuel. Cases have been reported when the fuel has run out with the computer showing 25 more miles to go. Also, the statistics of average speed and fuel consumption are prone to failure when driving a digital tachograph truck without a driver card. This problem has now been solved by a software update from Mercedes. The Powershift transmission has also had a clutch kit/pressure plate failure issue with a recall in late 2009 some trucks have had further clutch cylinder failures with no renumeration from the manufacturer.

Singapore uses military variants of the Actros for its Singapore Army - in heavy-lift logisticial support roles, designated as the HMCT (High Mobility Cargo Transporter) and recently as a launch platform for the SPYDER air defense system. 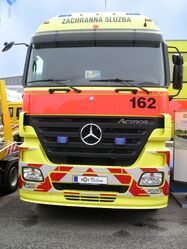 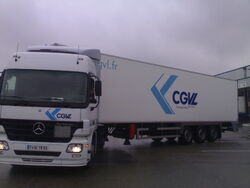 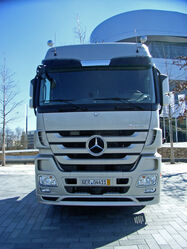 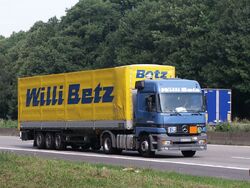 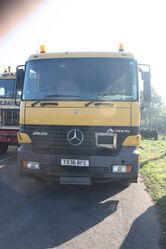 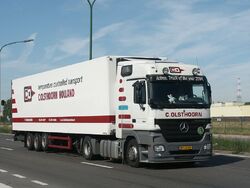 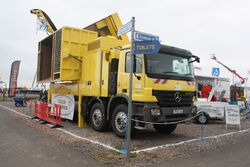 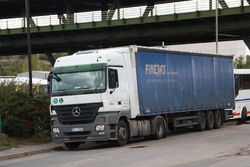 Retrieved from "https://tractors.fandom.com/wiki/Mercedes-Benz_Actros?oldid=182977"
Community content is available under CC-BY-SA unless otherwise noted.