The Mazda Bongo, also known as Mazda E-Series and Mazda Access, is a van manufactured by Japanese automaker Mazda from 1978 to 2001.

Mazda introduced its small van, the Bongo, in May 1966. It featured a 782 cc water-cooled OHV SA 4-stroke engine driving the rear wheels. The rear engined Bongo was produced in two versions from 1968, as the F800 was joined by the bigger engined F1000. Production ended in 1975, due to Mazda suffering serious economic troubles and upcoming stricter emissions regulations for 1976. This model retained the same body shape for its 10 year production life, the later models fitted with inertia-reel seat belts, and separate front parking indicator lights.

The rear engined Bongos had a full chassis (using the same Mazda 1000 engine as other variants mounted to a 4 speed transaxle at the rear) and were very strong and due to the low gearing, able to carry half a ton. Due to rust and poor maintenance, these Bongos are now few and far between. Exact numbers are not known, but a worldwide register [1] is currently being constructed to track all remaining examples.

The 1000 pickup and Bongo chassis are different, with common front suspension and brake components.

The next Bongo van appeared in September 1977. It was a mid-engine rear wheel drive vehicle. Ford sold this version of the van as the Ford Econovan, while Mazda sold it for export as the E1300, E1400, and E1600, depending on engine size. 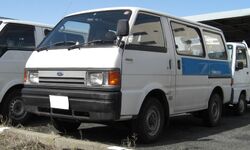 The Bongo was redesigned for 1984 with new engines. It was also sold by Ford in Asia as the "Spectron". A new long-wheelbase version known as the Bongo Brawny was also introduced, three months before the regular Bongo. In export markets this model was again sold as the E-series.

Launched in 1995, they are usually (but not exclusively) available in automatic transmissions, and come in 2WD (SGL3) and 4WD (SGL5) versions. 2.5 turbo diesels are common in Japan, although there is a 2.5 V6 petrol version available.

The SG platform Bongo Friendee was introduced in 1995. Ford began selling the Friendee in the Japanese home market as the Ford Freda.

The Mazda Bongo Friendee van SGL, is an eight seater MPV. Some have had Mazda factory fitted kitchens installed within their car, but many others are imported and converted to camper vans in the UK. All of them have fold down seats downstairs to make a double bed, and on many models there is also an "Auto Free Top" elevating roof which 2 more people can sleep in. Flat-top versions are also available.

In June 1998, Mitsubishi Motors began reselling the Bongo. This was branded the Mazda Access in some markets.

In 1999, a facelift version appeared with a revised bodystyle and different engines, although the 2.5 turbodiesel continues unchanged. Air conditioning, climate control and electronic blinds are fitted as standard.

From 1994 onwards, the Bongo was also sold by Nissan as the Vanette.