Maxus is a commercial vehicle marque owned by Shanghai Automotive Industry Corporation (SAIC).[1][2] It was launched in March 2011.[1]

The name of the marque originates from the Maxus model of the defunct British commercial vehicle manufacturer LDV Group, following the acquisition of LDV's intellectual property by SAIC in 2010.[1] The first Maxus product, the V80 van, was unveiled at the Auto Shanghai motor show in April 2011.[3] In the same month SAIC signed an agreement appointing the Malaysia-based WestStar group as the official distributor of the V80 for the Asia Pacific region.[4] The inauguration ceremony of the V80 was held in Shanghai on 29 June 2011.[5] 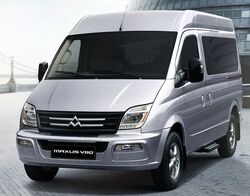