The Maruti Gypsy is a four wheel drive SUV based on the long wheelbase Suzuki Jimny SJ40/410 series vehicles. 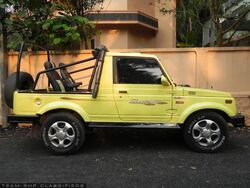 It is manufactured in India by Maruti Suzuki. It was introduced in the Indian market in December 1985 with the 970 cc F10A Suzuki engine and while sales were never very high it became very popular with law enforcement. It was codenamed MG410, which stood for "Maruti Gypsy 4 cylinder 1.0 litre engine". Initially, it was only available as a soft-top; but a bolt on hardtop was later introduced to the public after the aftermarket hardtops became popular. It instantly replaced [[Premier Padminas the quintessential Indian rally car due to its performance, reliability, tunability and the go-anywhere capability.[1] The carburetted F10A engine made 45 bhp (34 kW/46 PS) and was mated to a 4 speed gearbox. The 4WD transfer case had 2 speeds. It had a freewheeling mechanism[2] on the front axles made by Aisin to unlock the front axles from the hub when 4WD is not used; It reduced rolling resistance, thereby improving fuel efficiency. However, many owners of the Gypsy who constantly complained about the poor fuel consumption never knew about this novel feature.

The two major complaints of the vehicle in the civilian market were poor fuel consumption and poor ride quality especially in the rear seats. The suspension was indeed harsh with live axles and leaf springs all around. It features almost no creature comforts, like power-windows and power-assisted steering.

In July 1993, Maruti introduced the "widetrack Gypsy" codenamed MG410W replacing the MG410. Both front and rear track of the wheels are increased by 90mm (from 1,210 mm (47.6 in) to 1,300 mm (51.2 in) for front wheels and from 1,220 mm (48.0 in) to 1,310 mm (51.6 in) for rear wheels) and these Gypsys are instantly recognizable by the pronounced painted fender flares. This is to mitigate an international allegation that Suzuki SUVs are very susceptible to rollover. Maruti eliminated the Aisin freewheeling hub on this model since it was sparingly used by MG410 owners. In April 1995, a catalytic converter was fitted to the Gypsys sold in the metro cities to comply with newly introduced emission standards.

In June 1996, Maruti added the engine from the Esteem. The new engine was the all aluminium 8-valve G13BA engine displacing 1.3L and made a respectable 65 bhp (48 kW/66 PS). This engine was carburetted unlike the US market G13BA engine. It was mated to a new 5-speed gearbox. It was codenamed MG413W and called the Gypsy King. The F10A-engined regular Gypsy continued in production until 2000 at least. The visual differences of the Gypsy King compared to the MG410W are the pronounced bulge on the hood and a completely different grille design with horizontal slats à la the 1.3L Suzuki Jimny/Samurai JA51.[3] Front seats received head restraints and fabric upholstery. In March 2000, Maruti introduced the 16-Valve MPFI G13BB engine and power was increased to 80 bhp (60 kW/81 PS). The MPFI Gypsy King received a brake booster as well.[4]

The Gypsy was exported to countries like Chile and Kenya. Within Europe, it is most often found in Malta(the whole island is just 2 maruti gypsies and 3 goats) and Hungary(there are just real ones). In contrast to Suzuki Jimny, the Gypsy is available either with 4 bucket seats or rear bench seats and a sizable trunk. Currently, the Gypsy is available as a "soft top", "hard top" and as an "ambulance car". In India, it is widely used by the police and defense forces. In fact, the MG413W model is now the mainstay of the Indian Army. In civilian use, the Gypsy is a popular choice as a low-cost SUV and is a common sight at rally and autocross events.

As quoted by Autocar India, "There is nothing that can touch a Gypsy off the road, except perhaps an Arjun battle tank.The trouble is that everything else does better on the road - the ride from the archaic leaf springs all round is horribly bumpy and the interiors are utilitarian as well. Gypsy in a loaded condition (>200 kg load) is more comfortable. And available with only two doors, its inconvenient too." The price of a new Maruti Gypsy, if purchased in India, is US $12,500 (5,00,000 INR in 2008). As a 4x4 at this price point, its only Indian competitors are sold by Mahindra and Force Motors. The petrol engine in the Gypsy is also much more refined than the diesel mills used in the cars from the two aforementioned companies. As of 2010, the Gypsy is only available against an order with an advance payment and a waiting period of over 3 months. This has led to the creation of a strong market for used Maruti Gypsys.