The original product of this relatively small plant is the "LuAZ"-branded off-road vehicle, sturdy and simple, but outdated. At the moment the company is on the verge of bankruptcy, holding together by assembling cars produced by VAZ.

The company was once part of AvtoZAZ holding, but now is a part of the Bogdan group, which also controls bus manufacturing facilities in Cherkasy.

In 2005, LuAZ commenced assembly of Hyundai and Kia cars from kits, with production set to further expand in 2006.

A major expansion program is planned, which will see construction of a new car manufacturing facility in Cherkasy including a new paint shop, with planned annual assembly of around 60,000 Lada's and 60,000 Hyundai's and Kia's from 2007. Passenger car production will be transferred from Luts'k to Cherkasy, while bus production will move to Luts'k. 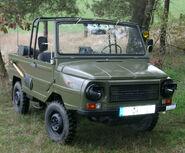 LuAZ 1302
Add a photo to this gallery

Wikimedia Commons has media related to:
LuAZ vehicles
Retrieved from "https://tractors.fandom.com/wiki/LuAZ?oldid=182901"
Community content is available under CC-BY-SA unless otherwise noted.