Livestock transportation is the movement of live animals, by ship, rail, road or air. Livestock are transported for many reasons, including but not limited to sale, auction, breeding, livestock shows, rodeos, fairs, slaughter, and grazing.

The first known records of livestock transportation occurred in about 1607 on an English ship named the Susan Constant, which was transporting Jamestown bound colonists. As time passed and the New World developed, supply ships from England carried livestock as regular cargo. Purebred stock was imported to Plymouth and Philadelphia in the USA. By about 1700, the exports of cattle and packed meat regularly left the port of Philadelphia which was bound for the West Indies. Livestock fatalities during sea shipments would often be 50% or more, which was attributed to poor feed supply, overcrowding, and rough seas.

Chicago’s meat exports had risen to almost 10% by 1848. Supposedly the first shipment of live cattle to Chicago by rail car was in 1867 on the Kansas Pacific Railway. About twenty carloads of Longhorns from Texas left the rail yard at Abilene, Kansas on the Kansas Pacific Railroad destined for the Chicago Stock Yards. This event changed the face of the livestock industry. Cattle from Texas were driven live on the hoof to rail yards for transport to major feeders, processors, and packers in the Major cities. Cattle trails were carefully chosen to minimize distance and maximize feed to sustain and fatten cattle. Cowboys were hired to gather, drive, and hold cattle at major buying stations. Cowboys reported route trail fatalities of about 3%. As the railroads expanded, processors multiplied and refrigeration technology developed, the refrigerated rail car was patented in 1867. The need to drive cattle ended and the cattle drive trail disappeared by 1889. The improvement of refrigerated transport gave birth to the dressed meat market. The distribution of dressed meat exploded, causing the need to ship live cattle by rail to slowly decrease and to become economically unfeasible by the turn of the 20th century.

By the early 20th century, railroads dominated the dressed meat market and the commodity trucking industry was in its infancy. By the middle of the 20th century, the refrigerated trailer was developed for commercial trucking and then the shipping of processed meats was done primarily by the trucking industry. The rail roads had fallen in to disrepair nor could they offer as many options for shipping and receiving of cattle and other livestock. Shipping live cattle by truck was much more economical, humane and offered more options in routing cattle to auctions, feeders, and processors. The trucking industry helped to create an interconnected road system throughout the United States.

Today most livestock and processed meat is transported by trucking companies that have specialized trailers for this purpose. Droving or herding, the movement of animals over ground, is still used in more remote or local areas.

The mechanisation of transport by road led to the development of specialist cattle trucks for road haulage, and of the stock car for rail transport.

The need to move the heavy carcases by road from slaughter house in the UK leaded to the development by the Tapp Brothers, meat merchants of London of a special 6-wheeled wagon to carry more weight. After getting requests from other meat merchants (butchers) they started the County Commercial Cars business to built the Ford Sussex and Ford Surrey conversions of Ford Model A (1927-1931) chassis. After WWII they went on to build the first County Tractor based on the Fordson E27N Major, and several Crawler tractors as well.

A selection of different makes; 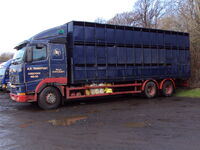 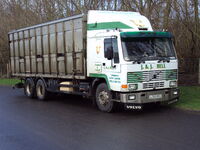 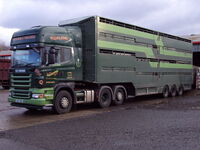 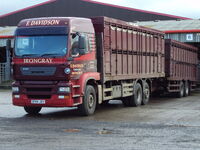 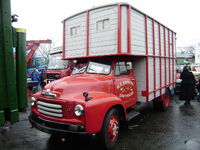 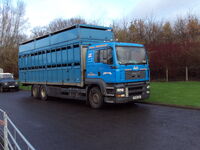 A few examples of Cattle wagons, have been restored by collectors and appear at Classic vehicle shows around the UK, but they are still relative scare as a body type, seen on the classic vehicle circuit.