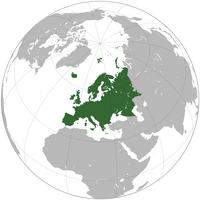 The list below includes all entities falling even partially under any of the various common definitions of Europe, geographical or political. Fifty sovereign states are listed with territory in Europe and/or membership in international European organisations, six states with limited or no recognition and eight areas that are not integral parts of a European state or have special political status.

Further information: Borders of the continents

The division between Asia and Europe is debated but under the commonly used definition, the border stretches along the Ural Mountains,[1] Ural River, and Caspian Sea in the east,[2] the Caucasus Mountains[3] and the Black Sea, with its outlets, the Bosporus and Dardanelles, in the south.[4][5][5] Based on that division, Azerbaijan, Georgia, Kazakhstan, Russia and Turkey have territory both in Europe and Asia.

The island of Cyprus in Southwest Asia is approximate to Anatolia (or Asia Minor) and is on the Anatolian Plate [6] but is often considered part of Europe as a current member of the European Union. Armenia is entirely in Southwest Asia but is a member of certain European organisations.[7]

Although the Mediterranean Sea provides a clearer divide between Africa and Europe, some traditionally European islands such as Sicily and Malta are located on the African continental plate.[8] The island of Iceland is part of the Mid-Atlantic Ridge, straddling the Eurasian Plate and the North American Plate.[9]

Other territories are part of European countries but are geographically located in other continents, such as the French overseas departments,[11] the Spanish cities of Ceuta and Melilla on the coast of Africa,[12] and the Dutch Caribbean territories of Bonaire, Saba and Sint Eustatius.[13]

A sovereign state is a political association with effective sovereignty over a population for whom it makes decisions in the national interest.[14] According to the Montevideo convention, a state must have a permanent population, a defined territory, a government, and the capacity to enter into relations with other states.[15]

There are 50 internationally recognised sovereign states with territory located in common definitions Europe and/or membership in international European organisations, of which 44 have their capital city within Europe. All except the Vatican City are members of the United Nations,[16] and all except Belarus, Kazakhstan and Vatican City are members of the Council of Europe.[17] Since 2007, 27 of these countries are also member states of the European Union, which means they are highly integrated with each other and share their sovereignty with EU institutions.

The following four entities in Europe have partial diplomatic recognition by one or more United Nations member states, and therefore are defined as states by the constitutive theory of statehood. None are members of the United Nations, Council of Europe or European Union.

The following two geo-political entities in Europe have no diplomatic recognition by a United Nations member state but are defined as states by the declarative theory of statehood. Neither is a member of the United Nations, Council of Europe or European Union.

The following places are considered integral parts of their controlling state, but have a political arrangement which was decided through an international agreement.

Retrieved from "https://tractors.fandom.com/wiki/List_of_sovereign_states_and_dependent_territories_in_Europe?oldid=77086"
Community content is available under CC-BY-SA unless otherwise noted.