Liner Concrete Machinery Company Ltd. of Park Road, Gateshead, Tyne and Wear, England, NE8 3HR. The company was owned by the Harrison Family.[clarification needed] The company manufactured a range of construction site machinery. An notable innovation was the Liner Giraffe the forerunner of the modern telescopic handler in 1974.[1] A new company Multi Quick Engineering now builds some of the Liner Mixer models sine acquiring the rights in 1991[citation (source) needed]

Originally starting at around the 1920s by a blacksmith and ironsmith workshop owner a Mr Liner who ran a busy yet small metalworking and welding business producing agricultural implements and construction equipment that grew successfully. The Postwar years were crucial for Mr Liner who decided to sell off the site and moved elsewhere to former abandoned warehouses at Gateshead to restart his business and resume work in 1955 to meet the local demand. Within a week his staff invented a four wheel cement mixer made in a similar way to a large MECCANO model he bought from a local scrapyard using srap metal parts and ironwheels for himself to use when he wanted to build a new large long wall along their yard at their factory at that time. Sales of this new patented cement mixer were high and this kickstarted the new firm of LINER CONCRETE MACHINERY COMPANY Limited. Much later LCMC as they were also called is believed to have ceased manufacturing machinery somewhere in the 1980s and were moved to Yorkshire although since then are owned by another independent company called LINER ENGINEERING LIMITED.

The company manufactured a wide range of site equipment such as Concrete mixers, site dumpers, Sawbenches, Roller Pan (Rollpanit) mortar mixers, Pan mixers for batching plants. LINER CONCRETE MACHINERY COMPANY LIMITED was a small company based in the large industrial town of Gateshead in England. LCMC LIMITED produced the first machines in the 1930s only available for the Postwar massive construction industry In order to reshape mainly all over the UK so their most successful models were a brand new model range of cement mixers and concrete mixers electric and petrol models entirely developed and produced by LINER themselves that existed at the time.

In the 1940s several new products were designed and manufactured this tme Electric and Petrol more modern machinery were launched and the firm had the UK Market to themselves for a while until about 1952 when improved or other domestic brandnames entered in this country. Later the firm also added a new Model Range of Diesel and Petrol Sitedumpers intended for Agriculture, Mining and General Construction work in ten different model options and sizes their production was lasted until the 1970s. In the 1980s new models were launched with heavier modern with 2WD and 4WD options in another 10 different models to choose from for many roles and buyers. In the 1970s LINER LIMITED developed something completely different, something entirely new called the LINER Telehandler model when it launched its new 'Giraffe' Series at the Public Works Exhibition in London by November 1974. This new model was loaded with latest features and functions including its own four equal-size wheels, four-wheel drive and four-wheel steering, and with a telescopic boom, that set the trend for standard modern telehandler and telescopic forklifts which we recognise today. Sadly, the Liner company did not live to see the fruits of its innovation. Its basic idea was good, but the same idea was soon developed by the others in the established technology available at the time like JCB, Matbro, Sanderson and many more other manufacturers.

In 1974 there were ten models available of the then new Liner Giraffe was described as a "site placing Vehicle". Several examples were sold to prestigious contracts such as the Dinorwic Pumped Storage System ("The Dinorwic Power Station") inside the mountains in Snowdonia, these being sold by Laurie Hatchard (now Hatchard Plant & Machinery in Cheshire) to the MBZ consortium who built the scheme. Another user was PR Morgan Plant Hire owned by Peter Morgan whose son Steve Morgan founded Redrow Construction. The Liner Giraffe was supplied to the RAF and British Army for materials handling duties with the Logistics Corp in the early 1980s of which several Liner Giraffe Telehandlers were ordered and delivered.

""""(There were never 10 models of the Giraffe in 1974. This claim is  innacurate. We launched one model of the Giraffe, the first one, which was the 243 in November 1974. Neither did it have a Leyland Diesel Engine. It was a Ford 2711E Four Cylinder Diesel engine. The pictures listed as Liner Giraffes at the end of this article i.e. pic 8th and pic 7th from the end are again misleading. The Two wheel drive model in yellow and white with twin telescopic boom is definately NOT a Giraffe. From memory that machine is a Collins Teleporter. The other machine make is unknown.  There is some very good content in this revision, but some of references to the LIner Giraffe are  untrue.

There are also some inacuracies in the descriptions of the pictures below. The RoughRider 2 wheel drive dumper did not have a petrol engine. The one in the twelth pic is clearly fitted with a Petter AVA1 Diesel Engine which preceeded the Petter PH1 Engine. Also the 5T description of the RoughRider Forklift is misleeding as the machine capacity for lifting was 1250kgs up to 18ft.

Laurie Hatchard ex Liner Concrete Machinery. I sold many Liner Machines including quite a number of the Liner Giraffes in the UK.)""""

If John Tate is still around please contact me John,  at Hatchard Plant & Machinery. Maybe we can add some more detail to this.

Also called and sold as handling vehicle as described during its sales in the Machinery Market, having a chassis provided with wheels, an engine, and a control cab, and a telescopically extensible boom mounted pivotally on supports extending up from the rear of the chassis and a load handling carriage on the free end of the boom. The boom and carriage are hydraulically operated. Hydraulic lines to rams for extending the boom and for operating the lifting carriage are provided by a set of flexible pipes rigidly secured to the trailing end of an outermost section of the boom, and a roller is mounted on the trailing end of an intermediate section of the boom. A shrouded probe supporting the pipes within the boom extends from the innermost boom section into the other sections of the boom, locating the pipes around the roller.

In 1991 the Liner brand was taken over by Multi Marque Engineering who manufacture a range of Pan mixers used in conservation work for lime motar and plasters and by traing centres.[2]

A short film of the Liner Giraffe was made for showing its capabilities, and is listed on the BFI data base.[3] 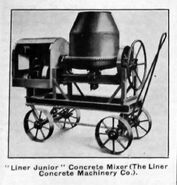 A 1930s LINER Pan Mixer for Builders and Construction work 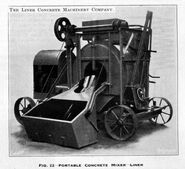 A LINER Roughrider Sitedumper model entirely made with MECCANO parts 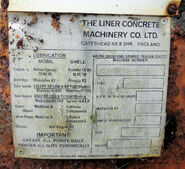 An original LINER Manufacturers nameplate on a LIner Forklift

A number of manuals for liner products are available from specialist dealers - www.manualfinders.co.uk and others.

Are any other Liner machines in preservation ? - Please add details here.