The Leyland Titan was a chassis with a front-mounted engine designed to carry double-decker bus bodywork. It was built mainly for the UK market between 1927 and 1942, and then between 1945 and 1970 after World War II.

When London Transport was established in 1933 it inherited a few hundred Leyland Titans from independent bus operators in London.

After World War II, London Transport bought more than 2,000 Leyland Titans specifically designed for use in London. They were designated as the RTL (1,631 built) and the wider variant RTW (500 built). In appearance they were very similar to the AEC-built RTs (4,825 built), the radiator shell being the most obvious difference (aside from the greater width of the RTWs).

London Transport's RTL554 when in service.

An RTL which has been exported to South Africa. 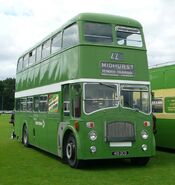 A Delaine Buses Titan PD2 with "tin front".
Add a photo to this gallery

Based on wikipedia stub

Retrieved from "https://tractors.fandom.com/wiki/Leyland_Titan?oldid=180800"
Community content is available under CC-BY-SA unless otherwise noted.