Leyland Motors has a long history dating from 1896, when the Sumner and Spurrier families founded the Lancashire Steam Motor Company in the town of Leyland in North West England. The company's first vehicle was a 1.5-ton-capacity steam powered van. The Lancashire Steam Motor Company was renamed Leyland Motors in 1907 when they took over Coulthards a small manufacturer of steam carriages and goods waggons of Preston. They also built a second factory in the neighbouring town of Chorley which still remains today as the headquarters of the LEX leasing and parts company.

In 1920 Leyland Motors produced the Leyland 8 luxury touring car, a development of which was driven by J.G. Parry-Thomas at Brooklands. Parry-Thomas was later killed in attempt on the land speed record when a chain drive broke. At the other extreme, they also produced the Trojan Utility Car in the Kingston on Thames factory from 1922 to 1928.

Three generations of Spurriers controlled Leyland Motors from its foundation until the retirement of Sir Henry Spurrier in 1964. Sir Henry inherited control of Leyland Motors from his father in 1942, and successfully guided its growth during the postwar years. Whilst the Spurrier family were in control the company enjoyed excellent labour relations—reputedly never losing a day's production through industrial action.

During the war, Leyland Motors along with most vehicle manufacturers was involved in war production. Leyland built the Cromwell tank at its works from 1943.

After the war, Leyland Motors continued military manufacture with the Centurion tank.

In 1946, AEC and Leyland Motors worked to form the British United Traction Ltd.

In 1955, through an equity agreement, manufacture of commercial vehicles under license from Leyland Motors commenced in Madras, India at the new Ashok factory. These Indian vehicles were branded as Ashok Leyland.

On the other hand, Leyland Motors acquired other companies in the post war years:

Donald Stokes took over as head of the company in 1964 and in 1968 it merged with British Motor Holdings (BMH) to form the British Leyland Motor Corporation (BLMC). BMH brought with it more famous British goods vehicle and bus and coach marques, including Daimler, Guy, BMC, Austin and Morris into the new organization.

The BLMC group was difficult to manage because of the many companies under its control, often making similar products. This, and other reasons, led to financial difficulties and in December 1974 British Leyland had to receive a guarantee from the British government.

In 1975, after the publication of the Ryder Report, BLMC nationalised as British Leyland (BL) and split into 4 divisions with the bus and truck production becoming the Leyland Truck & Bus division within the Land Rover Leyland Group. This division was spilt into Leyland Bus and Leyland Trucks in 1981. In 1986 BL changed its name to the Rover Group. The equity stake in Ashok Leyland was controlled by Land Rover Leyland International Holdings, and sold in 1987.

The bus operations were divested as a management buy-out to form Leyland Bus, and was subsequently bought by Volvo Buses in 1988, which discontinued most of its product range.

The Leyland name and logo continues as a recognised and respected marque across India, the wider subcontinent and parts of Africa in the form of Ashok Leyland. Part of the giant Hinduja Group, Ashok Leyland manufactures buses, trucks, defence vehicles and engines. The company is a leader in the heavy transportation sector within India and has an aggressive expansionary policy. Ironically, since 1987, when the London-based Hinduja Group bought the Indian-based Ashok Leyland company, it is once again a British-owned brand. Today, Ashok-Leyland is pursuing a joint venture with Nissan, and through its acquisition of the Czech Republic truck maker, Avia Trucks, is entering the European truck market directly. With its purchase of a 26% stake in UK-based bus manufacturer Optare in 2010, Ashok Leyland has taken a step closer to reconnecting with its British heritage, as Optare is a direct descendant of Leyland's UK bus-making division. On 21 December 2011, Ashok Leyland bought an additional 49% stake in Optare, bringing its total to 75%.

Historically, Leyland Motors was a major manufacturer of buses used in the United Kingdom and world-wide, being probably most famous for the trend-setting Atlantean rear-engined double decker bus design produced between 1956 and 1986.

The Marathon was Leyland's answer to the booming "max cab" truck fad at the start of the 1970s. Imports such as the Volvo F88 and Scania 110/140 were selling very well in the UK due to the previously unheard of levels of driver comfort, reliability, quality and performance.

Leyland had insufficient money for development of a complete new vehicle at the time, so designers were instructed to utilise as many existing in-house components as possible. It was perceived at the time that the resulting model would be a stopgap until the new T45 range was ready for production toward the latter half of the 1970s.

The cab was a re-worked version of the "Ergomatic" tilt cab of 1965, heavily modified with different lower panels, raised height etc, and was available in day and sleeper cab form. Engines were decided from the outset to be in the higher power category to be competitive with rival vehicles, the only existing engine within the Leyland empire suitable for such an application following the demise of the ill-fated fixed-head 500 series was the AEC AV760 straight six, which was turbocharged and designated the TL12. Other engine options included a 200bhp Leyland L11, Cummins 10 and 14 litre engines at 250/330 bhp. Production began in 1973, and various shortcomings were noted- including below par heating and ventilation, and pronounced cab roll. However road testers of the time were very impressed by the truck's power and performance. In 1977 the "Marathon 2" was launched, an updated and revised vehicle that attempted to address some of the previous criticisms of the earlier vehicle. Relatively few Marathons of all types were sold before production ended in 1979 with the introduction of the Leyland T45 "Roadtrain" range of vehicles.

This was Leyland's answer to the wellknown Ford Cargo in the non-HGV 7.5 ton truck sector. Launched in 1984, it utilised a A Leyland straight six engine until 1986 when a 5.9 cummins was introduced. It was notable at the time for its low level passenger side windscreen, featured as a safety aid to enable the driver to see the kerb, although this was deleted on later models. The basic cab had a long service life, becoming later on the Leyland daf 45 and finally the Daf LF.

The Leyland Roadtrain was a range of heavy goods vehicle tractor units manufactured by Leyland Trucks between 1980 and 1990. The nomenclature "T45" refers to the truck range design as a whole and encompasses models such as the lightweight 7.5 ton roadrunner, Freighter (4 wheel rigid truck) constructor (multi axle rigid tipper or mixer chassis-its chassis owing much to the outgoing Scammell Handyman 8 wheeler) and Cruiser (basic spec low weight tractor unit) The Roadtrain itself was a max weight model with distance work in mind.

The cab design was a joint effort between Leyland, BRS and Ogle design and was seen as the height of modernity when compared with its predecessors, the idea being to have one basic design to replace the various different outgoing models (for example, the Bathgate built G cab on the Terrier, the Ergomatic cabbed Lynx, Beaver etc). This did indeed make good economic sense, however there has been speculation that Leyland did in fact alienate a number of customers who had traditionally purchased other marques from within the Leyland empire—Albion, AEC, Scammell, etc.—who were now left with no alternative but to have a Leyland branded vehicle or purchase from elsewhere.

Throughout its production run engine choices included the AEC-based TL12, a straight carry over from the preceding "stopgap" model Marathon range, The Rolls-Royce Eagle 265/300 and the Cummins 290 L10 and 14-litre 350 coupled to a Spicer or Eaton transmission, although all versions produced a distinctive whine from the propshaft knuckle joint when approaching 60 mph (97 km/h). The TL12 engine was dropped early on in the production run, most large fleet buyers choosing the Rolls-Royce engine.

The Roadtrain was available in day and sleeper cabbed form, in high and low datum versions—this refers to the cab height—high datum versions were intended as long haul vehicles with higher mounted cabs and more internal space. 6x2 versions were built in high cab form only on a chassis that was basically that of the ageing Scammell Trunker model.

In 1986 the high roofed Roadtrain Interstate model was introduced, a top of the range long distance truck with standing room inside.

The Roadtrain was a common sight throughout most of the 1980s, with a great many of the major fleet users in the UK such as Tesco, Blue Circle (unusually with high datum day cabs) and BRS running them. The Firm of Swain's based at Rochester in Kent had a number of Roadtrains in its fleet which enjoyed a comparatively long service life (up until the late 1990s) before being replaced by the newer DAF 85.

Production ended in 1990 with the sale of Leyland Trucks to Dutch firm DAF, although as a postscript DAF relaunched the model in low datum form (it was already manufacturing the large DAF 95) as the DAF 80, using the Roadtrain cab with the DAF 330 ATi engine (quite ironic, given that this engine had its roots in the Leyland O.680). This model was produced for a relatively short time until 1993 with the launch of the brand new cabbed DAF 85 model.

Due partly to the cab's propensity to rust and also to the admittedly short life of commercial vehicles, any Roadtrain in commercial operation is now a very rare sight indeed, although a small number of vehicle remain in use throughout the country as recovery vehicles and wreckers.

The British Army made use of rare Roadtrain 8X8 version to work as a hook loader until recently. 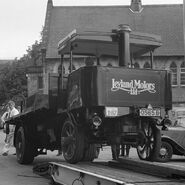 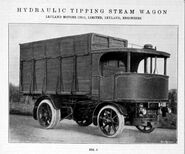 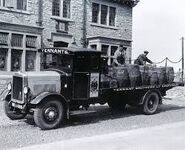 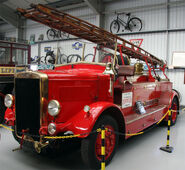 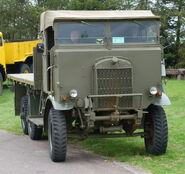 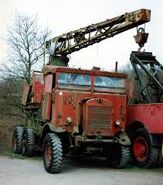 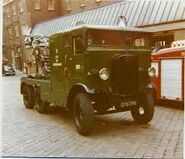 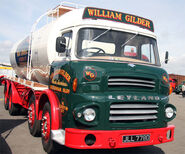 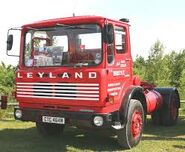