The Leyland Leopard was a mid-engined single-deck bus and coach chassis built by Leyland between 1959 and 1982. It was popular with bus and coach operators throughout the British Isles.

The Leyland Leopard was developed from the Leyland Tiger Cub, one of the most important changes being the introduction of the larger and more powerful Leyland O.600 engine (later-built Leopards were fitted with the 11.1-litre Leyland O.680 engine).

The Leyland Leopard's major direct competitor throughout most of its life was the AEC Reliance, even though AEC was a subsidiary of Leyland for a large proportion of that time. In the 1970s, the Volvo B58 became a serious competitor. There was also some competition for the Leopard from lighter weight chassis such as the Bedford VAL and Y-series.

The Leopard was superseded by the Leyland Tiger introduced in 19 ?.[clarification needed]

In England, BET Group subsidiaries were major customers for Leopards. For buses and dual-purpose vehicles, a BET standard design of bodywork was produced, primarily by Marshall of Cambridge and Willowbrook but also to a lesser extent by Weymann and Metro-Cammell. Another major English customer for the Leyland Leopard was Barton Transport of Chilwell near Nottingham, which built up a fleet of 200 with Plaxton Elite and Supreme coach bodywork. Unusually for a large operator, Barton standardised on this type of vehicle for all types of work including local stage carriage services; for this reason, all were fitted with a wide two-piece door, known as an "express" or a "grant" door. The latter term refers to the New Bus Grant, whereby the British Government paid part of the cost of a new bus providing it met certain specifications and spent a prescribed proportion of its time on local service work. Many other operators took advantage of this and bought Leopards built to the grant specification.

The Irish company CIÉ also bought a substantial fleet, mainly with bodywork built in its own workshops, as did its Northern Irish counterpart the UTA and its successor Ulsterbus, which bought the Alexander X type body. The Leopard was extremely common on Northern Irish roads for over 40 years, with the first one arriving in 1968 and the last one in 1984. During this period a total of 1500 Leopards were built. During the 30 years of 'The Troubles' in Northern Ireland, a total of 228 Leopards were stolen from their depots and maliciously destroyed often being used to crate burning barricades in the streets. In 2006, all Leopards were withdrawn from public service, with some even clocking up an incredible 28 years of service. In the 1980s, Ulsterbus shortened a few of its Leopards for use as towbuses. And as of 2008, 15 of these are still in active towing service with Ulsterbus.

In Scotland, many were bought by subsidiaries of the Scottish Bus Group and were mostly bodied by Alexanders with the Y type body, as both buses and coaches.

Leyland Leopards also saw use with the British Military, and were exported to many other countries. Although the vast majority were used as buses or coaches, a few were bodied as pantechnicons, and at least one as a car transporter.

A Leyland Leopard with dual-purpose BET-style bodywork by Marshall 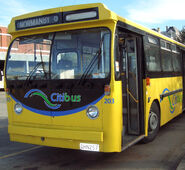 In common with most British buses and coaches, the Leyland Leopard is produced as a chassis and engine/transmission, which is then sent to a separate bodybuilder of the customer's choice for the bodywork to be built on it. For visual recognition there is therefore virtually nothing of the chassis visible from the outside, while vehicles which appear to be identical may have the same brand of bodywork built on chassis from different manufacturers. Recognition may be confined to the manufacturers badges supplied to the bodybuilder, and a few items such as the wheel hubs and the steering wheel centre. Vehicles which are exported often are sent as chassis only, to have their body built locally in the destination country.

The following coachbuilders produced bus or coach bodywork for the Leyland Leopard. The list includes companies which bodied only a small number of chassis (in some cases, just one).

Bodybuilders who built other styles of non-passenger bodywork on Leopard chassis include Carter, Cocker, Duple and Marshall.