Lambert Engineering Co. (Glasgow) Ltd were the builders of the Hydrocon brand of crane. The Company was founded in Glasgow, Scotland, United Kingdom.

The company was originally an engineering firm owned by Jack Lambert who sold it to George Jesner who designed the Hydrocon brand of crane, staring with a staff of one in 1949. The name was an amalgam of HYDRaulic CONstruction with an 'O' added in the middle. Hydrocon manufacture started in Maryhill docks in Glasgow, then moved to Burnfield works in Giffnock now the site of Harry fairbairn's Mini centre.

The first crane was bought by the engineering contractor Brown & Tawse, who became sales agents for Hydrocons in the north of England and also offered maintenance services from their workshops.

In the late '50s they moved to the former coal board site in Coatbridge, that was formerly the Summerlee Iron Works, and a small part of the Hydrocon site is now Summerlee Heritage Museum. By then the company payroll was close to 500!

In 1963 George Jesner sold the business to a UK Public Company called General Electrical Mechanical Systems Ltd. (G.E.M.S.) and joined their board. Shortly after he became Deputy Chairman of the PLC, until his death in 1968. (Confirmed D Jesner.)

Initially the cranes were built on ex- War Department vehicles, which George Jesner would buy up at sales and refurbish before installing the crane unit & glassfibre cab. Later when steel production returned to normal as rationing finished in the 1950's, the cranes used Thornycroft chassis and then Albion and Foden built units. Later, they built custom units using proprietary components by major UK manufacturers such as the Ford trader chassis as it had 4 wheel drive.

The circular raised panels on the cab had a full colour transfer logo of a Highlander, complete with kilt and claymore, with the cab interiors trimmed in a red tartan.

Hydrocon was the first crane to be operated by just hydraulic drive rather than the mechanical clutch and break system previously used. The company also became the first user of fibreglass in the UK for cabs and the first crane to carry its own jib sections.(Confirmed D Jesner.)

Another innovative Hydrocon feature first seen on the 50 ton Hampden model, was that the operators cabin could tilt back to allow the operator sight of the end of the jib.

The ease of operation was a major sales feature, with the company's publicity material which showed a young lad operating the crane with the comment 'Our Managing Director's four and a half year old son can operate a Hydrocon, so your drivers should not have any difficulty.' (I can confirm this as I was that son! D Jesner.)

Hydrocons were a great success for the post war rebuilding of Britain, and were extremely popular on building sites for the erection of steel work. Many of the growing crane hire companies had fleets of Hydrocons, replacing manual ex military lattice jib cranes from Coles Cranes and others. The cranes enjoyed a good export trade worldwide including Greece, Malta (where many can still be found today), Middle East, Spain, Sweden, Australia etc.

All the models were up until 1963, called after Scottish words beginning with the letter 'H' with the exception of the tiny Hornet.

A number of these cranes are still to be seen in scrapyards, boatyards and with small fabrication companies for yard work and site erection of building frameworks, but the increased H&S of recent years has resulted in many being pensioned off from owner operator fleets, as contractors insist on certification and training etc and the use of contract lifting services from larger hirers has increased along with the need for bigger cranes. The glut of cheap Japanese and Asian cranes from the far east in the late 80's and early 90s also had an effect.

A few examples have been saved by enthusiasts but these are rare as the early pre-electronic era machines enjoyed a steady export trade to the 3rd world well into the 1990s, by which time most examples had been withdrawn from regular service. A few examples still survive in operation in small steelwork/engineering fabrication yards and boat yards for occasional use. 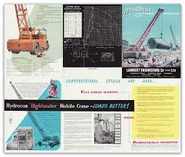 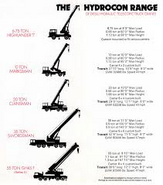 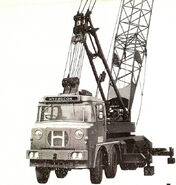 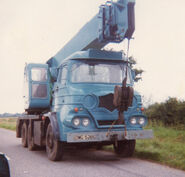 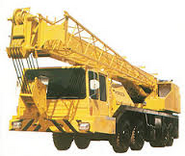