Tractor & Construction Plant Wiki
Register
Don't have an account?
Sign In
Advertisement
in: All articles with unsourced statements, LDV vehicles, 2004 introductions,
and 6 more

The MAXUS is a van model produced by LDV Limited. It was launched in late 2004. The model was jointly developed by LDV and Daewoo Motor, prior to Daewoo entering receivership in 2000, in a five year, £500 million development program. Following General Motors' acquisition of Daewoo, LDV secured the exclusive rights to the vehicle, purchased the tooling and moved it from Daewoo's plant in Poland to the LDV site in Birmingham.

Since 2005 the vehicle has received good reviews and has sold well across the UK. The van is being used on fleet basis by companies such as Transco, Royal Mail and various UK police services. The van is also very popular in the hire market.[citation needed]

LDV was acquired in 2006 by the Russian automotive giant GAZ and there are plans to start production of the MAXUS in one of GAZ's Russian factories by 2010.

The LDV factory went into administration on the week of the 8th of June 2009, due to lack of funds from Russian owner GAZ. Some 800 workers were laid off during this period leaving the whole van building operation in question. It was hoped that Weststar may make a bid to buy the maker to allow production to restart with the funding in place.

In August 2010, it was reported that China's SAIC, which bought most of the LDV assets, planned to launch the Chinese version of Maxus in late 2011. [3] In 2011, the Chinese company Shanghai Automotive Industry Corporation (SAIC) launched a new commercial vehicle marque called Maxus, following its acquisition of the intellectual property of LDV in 2010.[4][5] The LDV Maxus model was relaunched by SAIC as the V80 in June 2011.[4]

The MAXUS is available in two wheelbases, three roof heights and a choice of 2.8t, 3.2t and 3.5t GVW.

The vehicle is also available in these roles:

The Maxus is available in two wheelbases, three roof heights and a choice of 2.8t, 3.2t and 3.5t GVW. The vehicle is also available in these roles:

The Maxus is also built in other countries around the world under various brands, many of them utilizing CKDs. 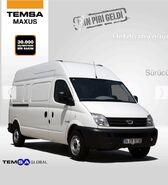 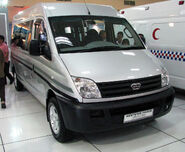 In Istanbul, Turkey, Askam assembled it under the Fargo Trucks brand as the 'Fargo Fora until Askam's bankruptcy in 2015.[6]

Available from the summer of 2011, the Chinese built V80 is available in three versions: Minibus, Logistics and Special Purpose. The Minibus is available from 7 to 16 seaters, in two trim levels. The choice of two wheelbases remains, with two different versions of the 2.5-liter diesel engine producing 88 or 100kw.[7]

After the fall of Askam, TEMSA based in Adana, Turkey began selling the TEMSA Maxus.

In Pekan, Malaysia], (DRB-HICOM) assembles it as the Weststar LDV Maxus[8]

In Nizhny Novgorod, Russia, GAZ builds the truck as the GAZ Gazelle.

In Warsaw, Poland, FSO assembles/assembled it as well.