K & L Steelfounders and Engineers Ltd was the original company name of what would later became Jones Cranes Ltd. K&L was founded in February 1915 in a steelworks warehouse in the city of Letchworth at Hertfordshire England also the home of Shelvoke Dempster Ltd another local motor enginering company that made trucks, army lorries and gained popularity for their big SD Routechief dustcarts and other road vehicles.

K & L Steelfounders And Engineers Ltd recorded history starts in late 1915 when two Belgian industrial entrepeneurs named Jacques Kryn and Raoul Lahy founded the firm using their surname letters to name it as they were looking for a town to start their mechanical engineering company somewhere in UK and found a suitable site in Letchworth and founded a steelworks business under the brandname of K & L Steelfounders & Engineers Ltd.

But by 1938 during World War 2 under new management and workforce was found the whole firm grew stronger and changed their name to Jones Cranes Ltd and were one of the UK leaders of manufacturing tracked and wheeled mobile cranes of many types and were the closest market companion to larger Coles Cranes Ltd another crane making domestic operation who started their business in 1892 in London.

On the other hand K & L company became involved with George Cohen Sons & Co Ltd another separate British private investment group who itself belonged to the The 600 Group of Companies who are also a heavy engineering group very similar to another one called Clark Chapman & Company Ltd based in Gateshead who already owned several other UK construction machinery manufacturers and are still in business today. The name K & L Steelfounders & Engineers Limited was soon gone and dropped in 1938.

In 1938 the company changed it name to more suitable JONES CRANES LTD now moving to another new expanded modern and larger factory in Letchworth and began with their smallest model when they launched the Jones KL15 mobile crane that could handle 10t lifts and was very popular with the RAF, then came the heavier and larger K144 and K166 for 15 t lifts in self contained mobile versions and truck mounted cranes all of them were soon quickly popular and found many tasks with the Army just like Coles Cranes was at the time. Other models included tracked cranes and specially adapted for use in dockyards, shipyards and ports with extralong jibreach and elevated operator/drivers cabs such as was the huge 16 wheeled Jones 2200 HLB this model was a massive multifunctional mobile crane that is found more common in dockyards and shipyards and remains the largest crane model they ever made so far.

The Jones KL66 soon became very popular with the Royal Engineers too for many duties during wartime and in peacetimes and it was available in truck mounted usually with Albion and Atkinson lorries and was available as in a yardcrane version. During WW2 it was reported that the Army barges arriving at Normandy beaches in 1944 their supplies and stores were all unloaded and delivered by Jones units fitted on them to help on the conflict. This was the result of a large order of 180 Jones KL series units placed by the RAF and the British Army prior of their departure from England to reach Arromanches in France at Normandy and Jones Cranes Ltd was starting to become wellknown and played a major contribution to WW2 and helped to win the War on D-Day.

Later after WW2 finally ended Jones Cranes Ltd became a solid and established manufacturer were later involved in developing larger cranes that were usually donor lorry mounted on Bedford, Leyland, Foden, Albion, Dennis and also Shelvoke vehicles were the most common cranecarriers that were used and some of them even had 4WD or 6WD axles depending on the models available.

By the 1960s Jones wanted to increase their mobilecrane range with the aid of offroad going and driving so they asked specialist AWD Ltd of Camberley in Surrey to help them design a special go anywhere cranecarrier that would be suitable for a new 6WD Jones mobilecrane after a couple of protoypes built some were successful and a friendly technical partnership was found among the 2 firms.

The brandnew machine was known as the JONES KL1010 6WD mobilecrane launched in 1962 with high ground clearence fitted with rough terrain tyres, it was able to travel anywhere it was needed because it had all its 6 wheels driven with special AWD axles and could be driven anywhere it was needed and could lift 15tonnes safely on its 30ft jib including an allnew fully glassed cab with its controls and levers beside the drivers seat and slowly it was this unit that was the biggest model sold in large numbers after the Jones KL66 before it and was the model that became the much needed instant hit for Jones Cranes who managed to sell over 5000 units all over Europe during the 1960s.[citation (source) needed]

Other larger Jones models were also available and built by them usually being fitted to 6x4 and also 8x4 cranecarriers provided mostly by Atkinson, ERF, Foden and Leyland lorries but many were sold abroad to Australia, Ireland, Malta and New Zealand where the mobilecrane market was made up almost entirely of British Cranes where the only major competitor was again Coles. These cranes included the medium sized Jones 461 Series /Jones 561 and 565 Series the larger Jones 661 Series and the heavier Jones 851 Series these last two were always fitted to 8x4 cranecarriers and of course they were for a long while the only cranetrucks to be found in those countries.

In the 1960s JONES CRANES LTD entered an agreement with smaller firm BHCC Iron Fairy another cranemaking specialist with a low profile who agreed to start technical work on design/development on a whole new breed of updated two axled yardcranes and 4X4 mobilecranes that was later proven very profitable for both firms. -
Further information: BHCC Iron Fairy
for more details.

The new manufacturer JONES under a new identity kept developing and prospered well from the 1960s onwards and were making several more crane models progressively in optional both lorry mounted and in mobile versions often with tracks like the Jones 917C the C for Crawler and in 4 wheeled versions of the same model as the Jones 971M the M for Mobile for example that was available in both options as this mobilecrane would later prove itself very popular perhaps one of the more common model of the range and the company only made their models in white cabs in full deep red body, except for a few models painted in other colours on some units and there is photograph of a Jones 917HLB Crawler example at Whitby Harbour UK still in use at work and it can be found at the JONES CRANES LTD Title Edition of this website, where more information can be found and some photos.

KL55 A heavier mobilecrane mainly used by the RAF in World War 2 and extensively for many tasks.

KL66 A larger and longer version of the KL55 and very common in the Army and the RAF for 10 ton lifts.

KL144 A heavy crane mounted on railway wagons for 12 ton lifts and used mainly all over Hertfordshire.

KL166 Very similar way to the KL144 but with longer jib for 15 ton loads popular with the British Railways. 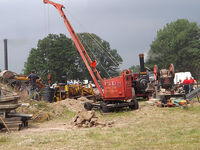 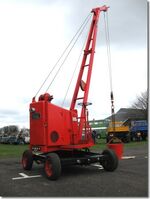 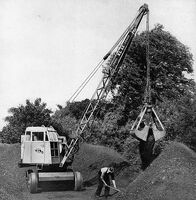 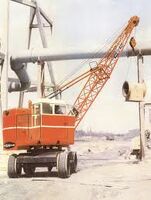 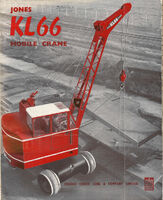 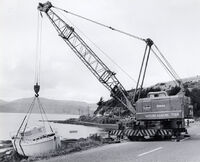 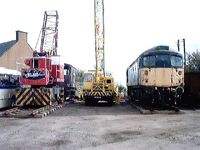 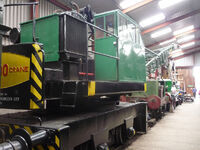 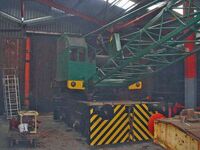 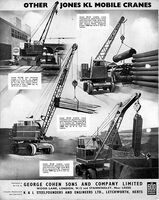 Retrieved from "https://tractors.fandom.com/wiki/K_%26_L_Steelfounders?oldid=191129"
Community content is available under CC-BY-SA unless otherwise noted.