These tractors were built in huge numbers in the USA but few were imported into the UK. Many of the examples on show in the UK are recent imports, as the US climate ina lot of states has treated the tractors better so reasonable condition examples can be found. 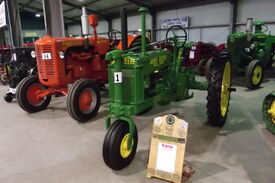 Retrieved from "https://tractors.fandom.com/wiki/John_Deere_Model_GP?oldid=154462"
Community content is available under CC-BY-SA unless otherwise noted.