Jabalpur Vehicle Factory (JVF) (Hindi: वाहन निर्माणी जबलपुर), is a military motor vehicle manufacturing factory located in Jabalpur, Madhya Pradesh, India, functioning under the aegis of Ordnance Factories Board controlled by the Ministry of Defence, Government of India. [1] The company is headed only by an IOFS officer called General Manager (ex-officio Additional Secretary to Government of India) who is the Chief Executive Officer responsible for the overall management of the company and is the main judicial authority.[2] JVF is the sole supplier of B vehicles to the Indian Army.

The production of Shaktiman trucks, Jonga Light Utility Vehicles and Vahan 1 ton began at the Gun Carriage Factory Jabalpur in 1959.[3] Pandit Jawaharlal Nehru, the then Prime Minister of India was present to witness rolling of the first batch of vehicles at GCF. It was shifted to the present location in 1969.[4] It started manufacturing Shaktiman trucks with license from MAN SE of Germany[5] along with Jonga[6][7] and Vahan 1 ton under license from Nissan of Japan.[8] All three of the above products have been retired and replaced by the new products.[9]

Matang was completely developed and manufactured by JVF.

Petrol Jonga was manufactured by JVF until 1999.

Jonga Re-Engineered with a Diesel engine was introduced in 1999.

India's first 3-way tipper was built on the Shaktiman platform.

Shaktiman's production was stopped in 1997. 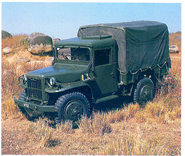 Flyer ITV was manufactured in collaboration with Marvin Group, USA.

Present Products and their variants

Jabalpur Vehicle Factory has an R&D centre responsible for development of future vehicles and related technologies. It has tie-ups with Ashok Leyland and Tata Motors. Its research partner is Vehicle Research & Development Establishment of Defence Research and Development Organisation.