The Iveco Daily is a large van produced by Iveco from 1978; it was sold also as Fiat Daily until 1983. It is also available as a minibus.

The second generation Daily was introduced in 1990, with a totally revised cab and improvements on the Sofim engine (at that time, with a 2.5 L capacity). Following the entry of Ford's commercial operation into Iveco,in 1986, The Daily 3.5 ton was soon removed from the UK market as it was now direct competition with Fords Transit, the Daily stayed on in the UK at rated above 4.0 ton, and now sold as Iveco-Ford Truck. The Daily has no other connection with the Transit.

The second generation was facelifted in 1996; it differs only slightly exterior-wise, but the engine was now available in 2.8-litre capacity 76 KW (103 hp). The 59-12(chassis cabs and panel vans) and 59-13(minibus) models were launched (GVW 6.4 tons) All-wheel-drive variants were also made available.

With third series the Daily got new light groups (wider and lower). The Turbodaily name was dropped as all turbodiesels came with Unijet technology (common rail). Two new versions were released: "Agile", with automatic gearshift, and "CNG", a natural gas version. Also two new load classes were introduced: Daily 65 and Daily 28 (6.5 tons and 2.8 tons). The Iveco Daily was made "Van of the Year" for the year 2000. Apart from a revised grille and lights the third series Daily is now 'bodily' clearly a Renault Master. Most glass and body panels are directly transferable.

The current generation was designed by Giugiaro and arrived to markets in the middle of 2006. It's available as: Van, cabin cruiser, Combi, Minibus, Agile, and CNG. The minibus is also commercialized with the Irisbus brand.

The CAMELEON IV440 is a four wheel drive modular mission system vehicle designed by Jez Hermer MBE and produced by the OVIK Group. Designed and developed in 2010, the CAMELEON IV440 is based upon the IVECO Daily 4x4 chassis but incorporates a number of modifications designed by OVIK plus a range of specialist mission modules which can be interchanged rapidly, giving the vehicle a multi-functional utility. The OVIK Group integrates a bespoke hydraulic load changer system and generally ruggedises the IVECO Daily 4x4 cab, adding roll suppressor, top hatch, light covers, winch and bull bars.

The general concept behind the CAMELEON system is to provide military forces, civil and emergency services and commercial users with a modular vehicle which can be reconfigured, rapidly, into a range of different roles. The load changer system enables the vehicle crew to re-role the CAMELEON into a completely new capability in under one minute; role changing is a one-man operation.

The CAMELEON IV440 utilises a lightweight, hydraulic load changer system (sometimes referred to as a DROPS system) to enable rapid platform reconfiguration. From a troop carrier to an ambulance, from an ambulance to a mortar platform etc. Once the mission module is aboard the base vehicle, the CAMELEON system hydraulically locks the load into place, ensuring complete safety and security – even in the event of a vehicle roll-over. For modules with integrated electrical systems an automatic inter-vehicle connection is provided, doing away with the need for the crewman to manually connect and disconnect power cables. Modules can be fitted with integral and independent environmental control systems (heating and air-conditioning), independent hydraulics (for cranes, winches etc.) and independent power generation for continued operations in the ground dismounted role.

CAMELEON can be configured to support specialist operations. For example, the IV440 chassis system can be modified to suit a range of requirements – bodywork can be reconfigured to provide additional firepower, stealth and flexibility.

CAMELEON modules can operate as ambulances (with varying levels of casualty dependency built in).

In line with the humanitarian utility CAMELEON can also support emergency rescue operations with a range of tipping bodies with integrated excavation equipment, winches and cranes.

CAMELEON is suited for carriage of a wide range of logistic loads from fuel to water and dry stores.

CAMELEON aims to reduce its customers' capital investment in high cost / low use specialist platforms by providing a vehicle than is fully adaptable.

The CAMELEON storage system is a multi-story racking system developed from the leisure boating industry. Multiple modules can be stacked four high and managed with a high-lift for lift truck thus enabling fleet managers to reduce not only capital outlay but also storage space for vehicles.

Unlike most other specialist vehicles – CAMELEON can leave its mission payload on the mission area – for continued support after the base vehicle’s departure. Fuel tanks, generators, command modules can all be strategically positioned to support operations thus leaving the base vehicle free to be re-roled.

For example, the CAMELEON SENTINEL system provides commanders with an instant dismounted fire-base for the rapid establishment of vehicle and personnel checkpoints. Crews dismount the SENTINEL module which transforms from a vehicle born patrol module with its built in weapon systems and armour to create an instantaneous, de-mounted, semi-permanent, protected structure with integrated weapons and electrical power.

Lethality and Self Protection

OVIK utilise PLATTMOUNTS weapon mounting systems on CAMELEON, designed to provide weapon flexibility, stability and reliability. Every (Defence) CAMELEON base vehicle is fitted with a minimum medium machine gun mounting system to provide the vehicle crew with a self-defence capability. CAMELEON mission modules can be fitted with a wide array of weapon installation to suit specific firepower requirements. From 5.56mm to 12.7mm and 40mm Grenade Launchers.

The CAMELEON IV440 can operate across a wide environmental spectrum - from the desert to the Arctic. Vehicles can be equipped with heating and / or air conditioning environmental control systems.

The IV440 is fitted with a high output alternator to provide maximum power to the vehicle and module systems. For dismounted modules, CAMELEON provide a number of ground-mounted and fully integrated power generator systems.

In the defence role the vehicle operates as standard with run-flat tyres. 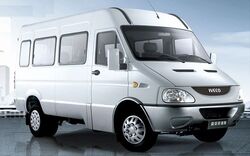 The Iveco Daily is also produced in China by Nanjing Iveco Automobile Co Ltd, or NAVECO, a joint venture between Nanjing Autmobile and Iveco.