Iveco-Ford was the joint company formed when Ford of Europe in 1986 sold 52% of its European (Ford of Britain) truck operations to the Italian Iveco group. Subsequent vehicles have been badged Iveco Ford. Ford plants took over production and sales of the major vehicles in the Iveco range and continued production of the Ford Cargo.[1] 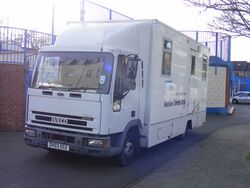 Retrieved from "https://tractors.fandom.com/wiki/Iveco-Ford?oldid=183301"
Community content is available under CC-BY-SA unless otherwise noted.