The International TD-18 was the first tractor with International’s striking new styling theme, with smoothly rounded corners and a grille with a single vertical center bar and numerous fine horizontal bars sweeping around to line up with similar bars in the hood side panels. The TD-18 was also the first International to use a new numbering system and it was the biggest crawler the company had made, weighing almost 11 tons. The new 691 ci 6-cylinder diesel had the same bore and stroke as the 4-cylinder in the McCormick-Deering TD-40 and it retained the gasoline starting feature. The TD-18 developed 80 belt and 72 drawbar hp. The transmission was a 6-speed dual range unit.

The other major crawler manufacturers in 1939 were Allis-Chalmers, Caterpillar, and Cletrac. Allis-Chalmers didn’t make a full diesel in 1939 but its S-O semi-diesel was in the same class as the International TD-18. The S-O was un unstyled model first built in 1937. Its big 4-cylinder engine ran at lower rpm than the International and the power output was a little lower. The Caterpillar D-7 Series 9G, introduced in 1936 as the RD-7, developed considerably less power than the TD-18 at its normal 850 rpm operating speed. The Cletrac DD was a much smaller tractor, about the size of the International TD-40. In 1940 Allis-Chalmers brought out the HD-10. It was a styled model about the same size as the TD-18 but its General Motors 2-cycle full-diesel engine produced considerably more power, 98 belt hp at a high 1,600 rpm. The A-C also had a 6-speed transmission like the International. In 1941 Caterpillar introduced the revised D-7 Series 7M. It weighed about 3,000 lb more than the TD-18 and had more power (89 belt hp) at its new 1,000 rpm governed speed. In mid-1944 Caterpillar produced the even more powerful D-7 Series 3T. International was falling behind its competitors in this class and the TD-18 was replaced by the heavier and more powerful TD-18A in 1949.

No information on any individual examples of these tractors in preservation is currently available on here. 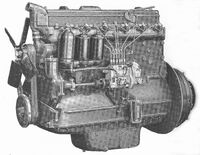 International TD-18 engine 1940
Add a photo to this gallery

Retrieved from "https://tractors.fandom.com/wiki/International_TD-18?oldid=175113"
Community content is available under CC-BY-SA unless otherwise noted.