The Cub Lo-Boy was based on the standard Farmall Cub and used the same sheet metal and same central tube chassis. Rotating the rear axle housings and shortening the front axle extensions lowered the tractor 7 inches. The first Cub Lo-Boy style came in two variations. For agricultural uses the Lo-Boy was considered to be part of the Farmall row-crop tractor line. It came with an adjustable front axle and was named the McCormick Farmall Cub Lo-Boy. This version was discontinued in 1968 because of low demand for the adjustable front axle. For municipal and industrial uses the tractor was treated as part of the International standard/industrial line. This version came with a non-adjustable front axle and was named the International Cub Lo-Boy. The original Lo-Boy used the same horizontal and vertical bar grille as the standard Cub in 1955. In 1957 the grille and nameplate panels on the hood sides were painted white to match the larger "30/50-series" tractors. In mid-1958 a new rounded white screen grille with two horizontal bars vaguely resembled the grille of the new "40/60-series" tractors. In 1964 the Lo-Boy was restyled with a squared-off white mesh grille, with the rest of the tractor in red. Later that year the standard colour for the Lo-Boy changed to Federal Yellow, with Harvester Red as an option. 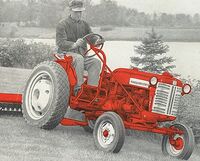 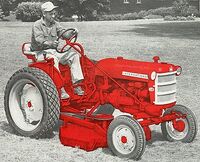 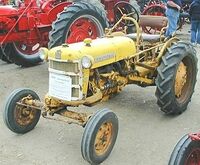 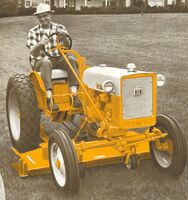 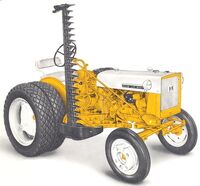 Retrieved from "https://tractors.fandom.com/wiki/International_Cub_Lo-Boy?oldid=175103"
Community content is available under CC-BY-SA unless otherwise noted.