The International Cub Lo-Boy was completely revised in 1968 to become the International Cub 154 Lo-Boy. A new frame based on two channel steel side members replaced the cast central torque tube and made it easier to attach mounted equipment. The governed speed of the engine was increased to 2200 rpm, raising engine hp to 15. Styling featured an entirely different grille shape. 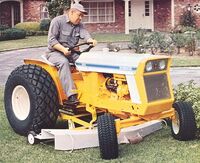