An ice cream van (British) or ice cream truck (American) is a commercial vehicle which serves as a travelling retail outlet for ice cream, usually during the summer. Ice cream vans are often seen parked at public events, or near parks, beaches, or other areas where people congregate. Ice cream vans often travel near where children play — outside schools, in residential areas, or in other locations. They usually stop briefly before moving on to the next street.

Ice cream vans are often brightly decorated and carry images of ice cream, or some other adornment, such as cartoon characters. They may have painted-on notices, which can serve a commercial purpose ("Stop me and buy one!") or a more serious one ("Watch that child!") - serving as a warning to passing motorists that children may run out into the road at the sight of the van, or appear without warning from behind it. Along the sides, a large sliding window acts as a serving hatch, and this is often covered with small pictures of the available products, with their associated prices. A distinctive feature of ice cream vans is their melodic chimes, and often these take the form of a famous and recognizable tune, usually "Turkey in the Straw", "The Entertainer,"[1] "Music Box Dancer", or "Camptown Races"; or, in the United Kingdom, "Greensleeves", "Whistle While You Work" in Crewe and Nantwich, "You Are My Sunshine" in Vale Royal, and "Match of the Day" in other places. In some places in the US, ice cream trucks play the song "Ice Cream" by Andre Nickatina (essentially just Turkey in the Straw with bass).

Most ice cream vans tend to sell both pre-manufactured ice lollies (American English: popsicles) in wrappers, and soft serve ice cream from a machine, served in a cone, and often with a chocolate flake (in Britain) or a sugary syrup flavored with, for example, strawberry. Soft serve ice cream is served topped with sprinkles for a slight extra charge. Other vans tend to be run by small businesses, selling their own variety of ice cream. For instance, Twirlees Ice Cream based in Toronto, Ontario has their own soft ice cream line (using patented One-Shot dispensers) with over 30 different flavours with franchises located throughout North America. While franchises or chains are rare within the ice cream truck community (most trucks are independently owned/run), there are a few chains including Twirlees.

In some locations, ice cream van operators have diversified to fill gaps in the market for soft drinks, using their capacity for refrigerated storage to sell chilled cans and bottles.

Early vans used relatively primitive techniques: their refrigeration was ensured by large blocks of dry ice so the motor was always turned off when the van was stopped for sales. The chimes were operated by a hand driven crank or a take-off from the motor, so they were not heard as often.

There are mainly two types of ice cream vans in the United Kingdom: a "hard van" which sells scoop ice cream and is only equipped with a freezer and a "soft van" which has a freezer and also a soft serve whippy machine installed serving Ice cream cones and Screwballs (ice cream). They are usually converted from factory standard vans with the rear cut away and replaced with a fibre glass body (to reduce the weight). Because of the British climate, running an ice cream van profitably is not only very difficult outside summer, but is also an unpredictable business. A summer heatwave can provoke a massive upturn in fortunes for a few days, but after the weather has returned to a milder character sales drop off dramatically. The need to take advantage of rare and short-lived opportunities can result in fierce rivalry between ice cream vans in coterminous areas, with the main disputes being over who is entitled to sell ice cream in a particular 'patch'. This has also led to some ice cream van vendors diversifying and selling other products such as crisps, chips (French-fries), burgers or hot dogs from their vehicles at other times of the year.

In a number of Local Authority areas, particularly in London Boroughs with existing street markets, street trading regulations prohibit ice cream vans from remaining in one static location. The legislation also contains powers to ban ice-cream vans from specific streets. Proposals in the current London Local Authorities Bill will allow only 15 minutes' trading per vehicle per street each day.[2]

British-style ice cream vans are also found in Hong Kong - there is usually one parked outside the Star Ferry terminal on Hong Kong island, and on Haiphong Road in Tsim Sha Tsui.

Some organized crime syndicates used them for laundering the proceeds of crime and a front for drug dealing. A period of Glaswegian criminal history called the Ice Cream Wars existed in the 1980s between rival gangs fighting for territory.

Also in Scotland, ice cream vans have been used to sell smuggled cigarettes.[3]

In the United StatesEdit

Apart from ice cream, ice cream trucks may also sell snow cones, snacks, sodas, and candy. Many trucks carry a sign, in the shape of a stop sign, that warns other drivers of children crossing the street to buy food or ice cream.

Professionally built ice cream trucks that sell prepackaged product (Novelty Trucks) use commercial cold plate freezers that plug in overnight and when unplugged maintain the cold for at least 12 hours. Music systems are mechanical, such as pianos, or more commonly digital devices that have no tape or other moving parts. Each "music box" may be able to play one or multiple tunes. The opening on the side that drivers serve from is commonly referred to as a serving window and will usually have a serving counter. Awnings can be attached to trucks over the serving window. Safety equipment usually comes in the form of an electric or vacuum swing out sign which may resemble a stop sign or a triangular shape, as well as vinyl lettering or decals that advise others to use caution.

These trucks are not seen too often in the United States due to their heavy fuel-guzzling generators. New technology has introduced new trucks with fuel efficient systems that do not need generators. These new trucks are based on a Chevrolet Express van, as well as other makes and are much smaller and lighter in weight than the older trucks. Twirlees ice cream has some of the worlds smallest ice cream trucks that use energy efficient patented One-Shot ice cream dispensers and inverters rather than large diesel generators. These Twirlees vehicles are extremely fuel efficient due to a small vehicle platform and no generator and are essentially the world's most cost effective soft ice cream truck not to mention better for the environment. 80% of consumers in North America prefer soft ice cream over all other types but due to the high cost of standard soft ice cream equipment, large vehicle platforms and generators, it makes getting into the soft ice cream truck business a very expensive endeavor.

In Scandinavia, the light blue Hjem-IS trucks provide door-to-door sales of bulk, pre-packed ice cream. The company is well-known for its distribution system, selling ice cream by the box, unlike ice-cream vans elsewhere in the world. They operate on a fixed schedule and can be tracked online.

In Southeast Asian countries including Thailand and Cambodia, ice cream is often sold from modified motorcycles with freezer sidecars.

Rather than vans or motorcycles Ice Cream sellers use an adapted bicycle to travel around the land with their product. Using a trumpet rather than a music player to attract attention and mark their presence. In beaches some go on foot with a special portable box to carry them. 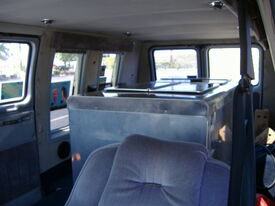 The interior of an ice cream van, with its enormous freezer. 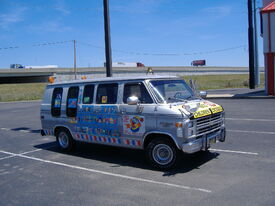 An 1985 Chevrolet Van used as an ice cream truck in metropolitan Louisville. 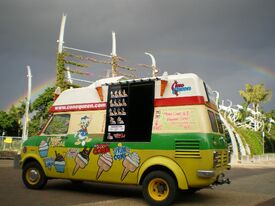 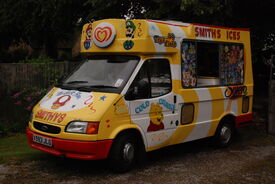 A 1999 Ford Transit-based ice cream van in the United Kingdom. 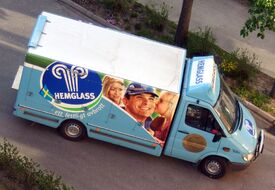 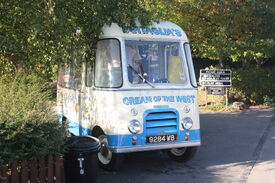 
Retrieved from "https://tractors.fandom.com/wiki/Ice_cream_van?oldid=84303"
Community content is available under CC-BY-SA unless otherwise noted.