The Hyundai Assan Otomotiv San ve Tic. A.Ş. is a joint venture between the South Korean Hyundai Motor Company and Turkey's Kibar Holding. Starting initially as an importer in 1990, a decision was taken on 25th September 1995 to open an assembly plant in İzmit. The opening ceremony of the plant was held on 20th September 1997.

A total investment of 180,000,000 USD was needed to construct the assembly plant, covering 108,000 m² of the 233,000 m² premises. Annual production capacity is 125,000 units, and the company is currently the fifth largest automaker in Turkey. In a customer satisfaction survey, Hyundai Assan climbed to first place with a network of 50 dealers and 90 authorized garages.

As a result of unexpectedly high demand, Hyundai Assan invested in a second assembly plant, partnering with Anadolu Isuzu Automotive Industry & Trading A.Ş., located in Kozyatağı. The plant is used by both companies for CKD assembling. Officially, this is not a joint venture, nor is there an official owner. 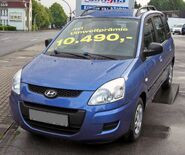 Retrieved from "https://tractors.fandom.com/wiki/Hyundai_Assan_Otomotiv?oldid=182529"
Community content is available under CC-BY-SA unless otherwise noted.