The Hymac or HY-MAC Company was established to market the American designed Hy-Hoe excavator in the UK in 1960. The company has had various owners during its life due to recessions in the 70 and 80's before ceasing production in the early 1990s.

The Companies Name has been used in several variations over the years in its own marketing material and on the machines. Hymac, HY-MAC, HYMAC being the most common.

The companies history like many other UK manufacturing firms has been complicated by the ups and downs of the economy and construction industry. This has resulted in many take overs and mergers with the brand being the 'public' face of the company and various corporate entities having control and marketing a variety of machines as HY-MAC, HYMAC and Hymac from the 1960s on. Some of these machines were designed and built by them and others were 'badge engineered' items, as is the case with a lot of Brands today like Massey Ferguson who are now a Brand and a subsidiary with some items built by other companies.

The company was born out of Powell Duffryn in Wales (established 1946) and starts manufacturing in South Wales, UK.[citation (source) needed]

The original site of Rhymney Engineering was the old Rhymney Iron Works, During the second world war a small engineering factory was built to produce Bomb Doors for the Lancaster Bomber. Part of the original Iron works still stands there It was used as a machine shop. Rhymney Engineering made a lot of colliery equipment such as Tumblers. Coal Skips (30Ton lift) and complete top of the pit works and roadways., Rhymney Engineering also produced most of the equipment to build a Power Station in Hong Kong the contract was named China Light. They made the boilers, conveyors and in fact everything except the turbines. It was shipped to Cardiff Docks in kits by rail in open topped wagons. That was about 1960. I started to work at Rhymney Engineeering on the 1st June 1960. The first Hymac for sale was produce in 1961 and Number 11 Machine was displayed on a plinth at the entrance of the Works at the bottom of the Fabricating Shop. The idea of manufacturing the Hymac Machine was brought to Rhymney by the then Managing Director Mr G Taylor and Mr Des Young{ This information is wrong, it was Peter Hamilton that brought the HyHoe from America, and he then designed and manufactured the first 360 all hydraulic excavator as we know it today, it is documented in the arkives at Oxford and the BBC made a documentery on the HY MAC in 1970.

The Hymac company was originally called Rhymney Engineering, an organisation that manufactured equipment for the coal mines and steel works. As the demand for mining equipment decreased, the orgaisation diversified into excavator and started to import the American designed and built Hy-Hoe excavators in kit form. When Hy-Hoe ceased manufacture in 1962 Hymac then took on the manufacturing rights, and stared manufacturing machines in South Wales, UK. The Hy-Hoe was NOT a 360 degree excavator but was limited to about 270 degrees as the slewing mechanism was chain driven.

The development of the Hymac 580 tracked (Imperial) excavator and the revised mark II version the 580B, was recognised by a Design Council award in 1967.

The 580B was replaced by the 580BT (Better Tracks) and eventually by the 580C. A more complete range of Imperial excavators was introduced including 880 and the 1280 which had capacities of 1 cu yd and 1.5 cu yd respecively.

To complement the tracked excavators a series of 4X4 wheeled equivalents were produced - the 610 being the 580 equivalent.

Hymac also produced a range of access platforms, mainly Land Rover based and a range of wheeled and crawler cranes with capacities up to 75 tonnes.[1]

As part of the Powell Duffryn Group Rhymney Engineering Company change it's name to reflect the Product name to Hy Mac. Powell Duffryn were a mini engineering conglomerate at the time with interests from Coal to Transport and Shipping. The company having a long history in coal and shipping, which still continues today. Powell Duffryn also owning British Engineering firms such as Belliss and Morcom and Hamworthy Engineering, as well as the US based Air Compressor Products Inc. and Eagle Compresors Inc. manufacturers of Industrial compressors.[2]

During the Powell Duffryn era they built a JCB 3C type Backhoe Loader during the 1970s that had a Heavy duty loader more like a loading shovel with arms made solid steel 1½ thick rather than box beams. Some versions having Hy reach arms. These Huge machines had a flat deck cab, with good visibility from the raised position of the driver. This was based on the Whitlock 860 machine, Hymac having taken over Whitlock the (one of several claimed inventors of the Backhoe Loader), in 1972.[3]

They also built a lot of wheeled 360 machines for scrap handling, fitted with 5 tine grabs or magnets, often with raised cabs. Till scrap yards started being cleaned up in the last few years, you would mainly see a Hymac or Atlas machine, or an old 22 RB crane in most yards. Now Terex built Fuchs and German Liebherr machines are Predominant.

During the Powell Duffryn ownership the company was the Demag distributor for the UK. An advert from that period claims 7,500 Hymac 580 machines sold.[4]

In the late 1980 a revised line of excavators with a new yellow colour scheme was launched. But too late to save them from the Japanese and other far eastern imports and the new JCB (Japanese designed) line up.

They generally had Ford engines, but some were fitted with Perkins units and some with Rolls Royce engines. The 360 excavators were available with a variety of Track and Boom / dipper combinations.

The Hymac operation was sold to the German IBH Group in about 1980.

In 1978 Hymac & Priestman were involved in a court case about the use of the designation '580' on priestman machines.[5] The model 580 being Hymacs most popular model.

The IBH group was a German investment company that owned numerous engineering firms. IBH also owned the German firm Hanomag, But they then went bust in 1983 , when the bank that backed them got into difficulties. Hanomag were linked with Massey Ferguson for a period, and built some of their construction plant models. Hanomag was partially taken over by Komatsu in 1989, with them becoming a 100% owned subsidiary of the Japanese firm in 2002. IBH also owned Euclid after it was divested by General Motors but after IBH's collapse it reverted to GM till it was sold off and became Terex.

In 1984 Hymac was bought from the receivers by Northern Engineering Industries (NEI).[7] Production of some Hymac models restarted near Wolverhampton. Then in 1987 the BM Group bought the company and renamed it Hymac Group Ltd. Then in 1988 ownership changed again after Gordon Brown (entrepreneur not British politician) (owner of BM group) formed "Brown Engineering (Hymac) Ltd". They then to cut costs and offer more modern machines sold badged Italian built machines from FAI Group. These were the W121 a 13ton machine, 211 a 21ton class model, and the 251 a 25ton class machine.

Following the collapse of the Brown Group in 1991, Irish plant dealer John Kennedy then introduced new models; the Synchron 1301 & 1501 in 1992 which featured Linde's Synchron load sensing hydraulic systems. But production finally ceased in 1993.

The very last machine ever built by Hymac was an model 181B 18t a sad end to yet another great British Engineering company.[citation (source) needed]

There have been many rumours that circulating Hymac will be making a come back but these are unfounded and Richard Gould who owns Hymac Parts & Service Ltd which is all that remains of the original Hymac company has plainly stated that there will be no further production of new machines. Hymac Parts & Services can however offer a rebuild program for old machines.

On checking with companies House, the old HY MAC companies, its directors, share holders, i can find no record of richard gould either as a director or share holder, other than hymac parts & services, which forms no part of the HY MAC original company, I also checked the Trade Marks Register {IPO} {WIPO}[oami}, and can find no HY MAC trade marks registerd to richard gould, HY MAC is registerd as a trade mark, in the name of, Anthony O'Gorman, as are the URL'S, www.hymac.com/ www.hy-mac.com/ .eu ect.

So it leads me to wonder why richard gould as made a statment about the hy mac brand.

Please do not publish false information on wikia, as any information can easily be varified from offical 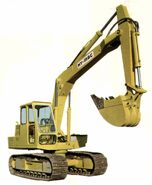 The badge engineered range introduced in the 1980s.[13]

A number of company's have and some still do a service to refurbish these machines as a number of users like the simplicity of a machine without the complex electronics of modern machines, for use in occasional light use application or modified as tool carriers for drilling rig used for grouting mine workings or with extra wide tracks on peat extraction duties.

The Machinery Forums report sighting of a number still in use around the world. They were a popular machine in scrap yards along with Atlas, but as the industry modernises and consolidates to a few bigger operators the old yards are closing and new 'recycling centres' are being equipped with modern Caterpillar, Fuchs, JCB, and Liebherr material handling machines with long reach booms, high lift cabs and rotator grabs in-place of the old magnet on a chain.

The product support department was sold to management buy out(MBO) by Richard Gould, as Hymac Parts and Service Ltd. They were based near by in Wolverhampton, but in 2000 moved to new premisses at Much Wenlock. New and used parts are still available, The new parts company holds 30,000 engineering drawings and will arrange manufacture of replacement parts if needed.[14][15]

Retrieved from "https://tractors.fandom.com/wiki/Hymac?oldid=95800"
Community content is available under CC-BY-SA unless otherwise noted.