The movement of modern Tractors and Construction Plant due to the size and weight of machines, requires the use of specialist equipment. The contractors involved in this are often referred to as "Heavy Haulage Contractors".

The collection of Older heavy Haulage Tractors is a growing hobby, with some people collecting older units to move their "Classic Plant or Tractors", others just collecting BIG trucks as they look impressive, and some are quite rare, but are generally cheaper than Steam 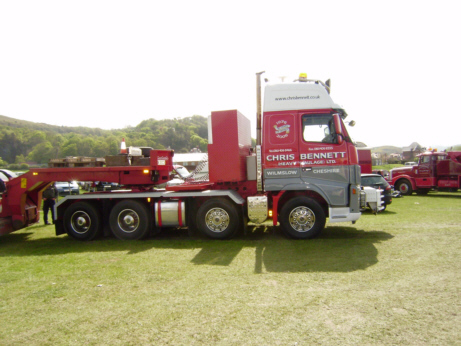 Then they moved on to using Steam Traction engines to move large items such as Boilers, presses, Stone blocks, Machine parts and similar large items during the Industrial revolution.

Following the 2nd World War, with large numbers of ex forces heavy trucks and tank transporters available, haulers quickly switched, as they did not need a couple of hours to get up steam, and no need to cart tons of coal along the route, less maintenance and cleaner.