GAZ (RTS:GAZA) or Gorkovsky Avtomobilny Zavod (Russia, Nizhny Novgorod), translated as Gorky Automobile Plant, started in 1929 as NNAZ, a cooperation between Ford and the Soviet Union.

In May 1929 the Soviet Union signed an agreement with the Ford Motor Company. Under its terms, the Soviets agreed to purchase $13 million worth of automobiles and parts, while Ford agreed to give technical assistance until 1938 to construct an integrated automobile-manufacturing plant at Nizhny Novgorod. Production started on January 1, 1932, and the factory and marque was titled Gorkovsky Avtomobilny Zavod, or GAZ, but also displayed the "Ford" sign. GAZ's first vehicle was the medium-priced Ford Model A, sold as the GAZ- A, and a light truck, the Ford Model AA (GAZ-AA). GAZ-A production commenced in 1932 and lasted until 1936, during which time over 100,000 examples were built.

Many American engineers and skilled auto workers moved to the Soviet Union to work at GAZ. Hundreds of American workers stayed on after the plant's completion in 1932, often with their families.[1] They had to deliver their American passports, and within a few years became victims of Stalin's Great Terror, either shot or exiled to Soviet gulags.[1] Attempts of these Americans to their embassy to help them were rebuffed or ignored.[1] A notable survivor of these expatriats was Viktor Herman.

The factory's name changed when the city was renamed after Maxim Gorky. From 1935 to 1956, the official name was augmented with imeni Molotova (literally, named after Molotov).

The GAZ-A was succeeded by the more modern GAZ M1 (based largely on the Ford Model B), produced from 1936 to 1942. The M letter stands for Molotovets ('of Molotov's fame'), it was the origin of the car's nickname, M'ka (Эмка).

Experience with the A and the M1 allowed the GAZ engineers to develop their own car model independently of Ford. Called the GAZ 11, this more upscale model entered production in 1942 and remained in limited wartime production until 1946. The M2's bodyshell entered limited production in 1941, mounted on a four-wheel drive chassis and sold in small quantities as the GAZ-61 (quite possibly the world's first all-wheel drive passenger car).

During the war years, GAZ engineers worked to develop an all-new car model to enter production once hostilities ended. Called the GAZ-M20 Pobeda (Victory), this affordably-priced sedan with streamlined, fastback styling, entered production in 1946 and was produced by GAZ until 1958. (Licensed production under the name Warszawa continued in Polish FSO until the 1970s). GAZ-72, a four-wheel drive version, was produced in low volume.

During the war GAZ also assembled Chevrolet G7107 and G7117 (G7107 with winch) from parts shipped from the USA according to Lend Lease agreement.

As DaimlerChrysler modernized its Sterling Heights Assembly plant in 2006, the old Dodge Stratus assembly line and tooling was sold to GAZ and will be shipped to Nizhny Novgorod in Russia. GAZ will resume production of the Stratus, and may introduce additional variants in the future, as GAZ has purchased the rights to use the platform in new vehicles.[2], whilst the company originally announced that the Volga will be phased out completely. However, GAZ has recently reversed course. Volga production, initially scheduled to end in 2007, will continue indefinitely and the car will receive a facelift. GAZ will adopt a new marketing tack, attempting to position the 1960s era design as a "retro" vehicle, while the Stratus-based products may also be sold under the Volga brand.

Also in 2006, GAZ made a move on the LDV company based in Birmingham, England, and acquired the van maker from the venture capital group Sun European Partners in July of that year.

GAZ have said that they plan to market the MAXUS (LDV's new Panel-van, that was released in January 2005) into the rest of Europe (it is currently only on sale in Britain and limited areas of Europe) and Asia. GAZ Propose to increase production in the LDV plant in England, while also commencing production of the MAXUS in a new plant in Russia.

In May 2009, GAZ officially announced they were reviewing a project to takeover GM European activities (Opel). The group said they were not planning to contribute any financing of the takeover, but they would provide manufacturing facilities in Russia for the group. 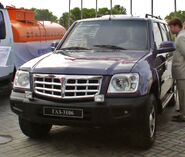 
Retrieved from "https://tractors.fandom.com/wiki/GAZ?oldid=182430"
Community content is available under CC-BY-SA unless otherwise noted.