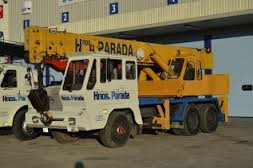 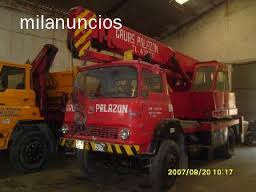 TALLERES GARASA S.A. originally started as agricultural dealers and suppliers of many types of farm machinery and other agricultural implements stockists in the 1950s. Since Spain is huge vast country, it was easy enough for Garasa to expand their business to most parts of the country, opening an office with spares warehouse on its biggest towns at the time.

The company owners decided to expand operations and went to the long established BARREIROS-DIESEL heavy vehicle factory at Villaverde in Madrid, who produced all kinds of engines and many road vehicles like bulldozers, wheeled tractors, crawler-tractors, lorries, crane carriers and also at one stage genuine automobiles.

BARREIROS then built a series of cranecarrier prototypes for GARASA in the 1970s, under the condition with terms that GARASA had to source the crane unit. However since GARASA had never built one before, they turned to the large local LUNA company who already built several of them for export and GARASA bought a new 10 T yardcrane for their own use and had intended to be able to launch it as part of their own model range later to be designated the Garasa G-Series, although they had to redesign somewhat the crane to fit on one of their recently acquired Barreiros chassis. Then it took another two years to develop or improve the 3 prototypes GARASA had made and, by the 1960s GARASA already had managed to create and make a small model range of 10 different mobile crane and yard crane models that were built on a variety of BARREIROS, EBRO, NAZAR, PEGASO two axled cranecarrier models ranging from 5 Tonnes to 20 Ton capacities, but it was always hard for GARASA to compete in the same mobile crane market with superior firms like IASA, IBESA and LUNA the other local rivals who were more experienced and longer established companies and GARASA then stopped producing any more cranes of their own but sold in healthy numbers until the late 1970s.

THe 'TALLERES GARASA' company still exists today as the local dealer for most German agricultural tractors and import quite a good number of modern Chinese-made earthmovers for the South Europe market.

Retrieved from "https://tractors.fandom.com/wiki/GARASA_Cranes?oldid=205938"
Community content is available under CC-BY-SA unless otherwise noted.