A fuel cell bus is a bus that uses a hydrogen fuel cell as its power source for electrically driven wheels, sometimes augmented in a hybrid fashion with batteries or a supercapacitor.

There are also fuel cell powered buses currently active or in production, such as a fleet of Thor buses with UTC Power fuel cells in California, operated by SunLine Transit Agency.[3]

The first Brazilian hydrogen fuel cell bus prototype will begin operation in São Paulo during the first quater of 2009. The hydrogen bus was manufactured in Caxias do Sul, and the hydrogen fuel will be produced in São Bernardo do Campo from water through electrolysis. The programme, called "Ônibus Brasileiro a Hidrogênio" (Brazilian Hydrogen Autobus), includes three additional buses.[4][5]

Currently, the town of Whistler in British Colombia, Canada owns and operates the largest fuel-cell bus fleet in the world, having being put in to operation for the 2010 Winter Olympics. 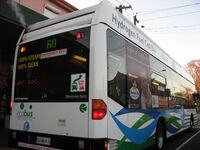 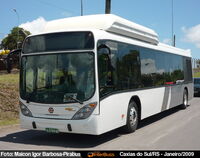 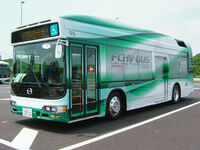 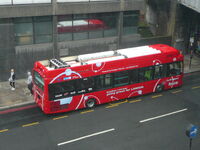